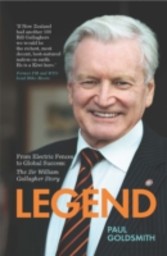 The story of New Zealand's most successful exporter and its head, Bill Gallagher, who built on the invention of an electric fence to make the company a world leader in its field.New Zealanders are always being exhorted to take a clever idea and go global. Easier said than done. But one iconic company has been doing just that for over 75 years. Gallagher Industries began in a Hamilton shed in the late 1930s, when a self-taught engineer, Bill Gallagher, came up with a design for an electric fence that transformed New Zealand farming. His sons Bill junior and John took over the business in the 1970s and applied their engineering genius and driving ambition to turn it into one of this country's most successful companies. Today it employs 600 staff in New Zealand and has distributes its animal containment and security products worldwide. Even Buckingham Palace is protected by a Gallagher security system! Based on a ceaseless quest for efficiency and world-beating new technology, Gallagher products are peerless, and the company's achievements the stuff of envy. And along the way Bill Gallagher, now Sir William, has managed to have plenty of adventure -- including diving for sunken treasure with Wade Doak and the late Kelly Tarlton.This fascinating book tells how Kiwi can-do can be transformed into global success and for the long haul. It hasn't been easy: more than once Gallagher has had to pull his business back from the brink, but his inspired leadership got it through. Other companies may fall to overseas owners or lose their way but under Sir William Gallagher, Gallagher Industries resourceful, nimble and generous in its philanthropy is a proud New Zealand business that's here to stay.