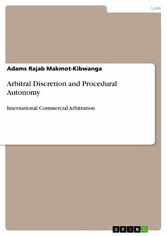 Document from the year 2017 in the subject Law - Comparative Legal Systems, Comparative Law, grade: A, , course: MASTER OF LAWS IN OIL AND GAS, language: English, abstract: The question this paper seeks to address is whether arbitral discretion, by freewheeling, addresses the issues raised without compromising procedural autonomy. It is important to explain what procedural autonomy means before delving into the discussion. Simply put, procedural autonomy means set procedures based on independent rules and norms followed over time and respected and recognised as such without being questioned by the parties that subject themselves to them. In arbitration, it may refer to arbitration rules set by a tribunal system or the national legislations regulating arbitration in a particular legal jurisdiction. By and large, it is the whole philosophy of having pre-determined rules and norms that the arbitrators are discouraged from departing from during the process of arbitration. This does not mean that the arbitrators cannot exercise their discretion. In fact, the whole arbitration process is based on discretion, but rather that the discretion must be exercised within a known procedural framework. Since arbitral discretion deals with procedural matters as well it is often the practice of arbitrators to decide on the issues involved at pre-trial. Such pre-trial issues may include discovery of documents, admission evidence and raising of issues for determination. On the face of it the arbitrators may employ their discretion to decide how much of which evidence to be taken meanwhile faced with a challenge to decide which arbitration model to employ in conducting the pre-trial engagement if the parties are from two or more conflicting arbitration jurisdictions.