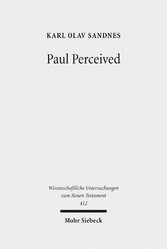 Paul Perceived - An Interactionist Perspective on Paul and the Law

Paul Perceived - An Interactionist Perspective on Paul and the Law

An epicenter in present-day Pauline scholarship is the issue of the Law. The interpretation of this contentious issue started before Paul's letters and found its way into them by his citing how others perceived of his theology, and in Paul rendering rumors and criticism, and also interacting with them. To this reception-oriented perspective belong also punitive actions taken against Paul by synagogues. As a reception of Paul, Acts is included, leaving a more complex picture than argued by advocates of Paul within Judaism. Thus Karl Olav Sandnes uncovers the first interpretation or reception of Paul's view on Torah. It is limited in its scope, but provides a critical and necessary view on common trends in Pauline scholarship. Paul's decentering of the Torah was considered endangering for morality, for Jews and Gentiles alike. Perceptions of Paul's theology must be accounted for in Pauline studies.