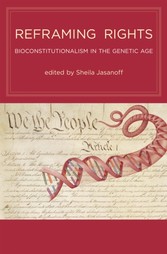 Legal texts have been with us since the dawn of human history. Beginning in 1953, life too became textual. The discovery of the structure of DNA made it possible to represent the basic matter of life with permutations and combinations of four letters of the alphabet, A, T, C, and G. Since then, the biological and legal conceptions of life have been in constant, mutually constitutive interplay -- the former focusing on life's definition, the latter on life's entitlements. Reframing Rights argues that this period of transformative change in law and the life sciences should be considered 'bioconstitutional.'Reframing Rights explores the evolving relationship of biology, biotechnology, and law through a series of national and cross-national case studies. Sheila Jasanoff maps out the conceptual territory in a substantive editorial introduction, after which the contributors offer 'snapshots' of developments at the frontiers of biotechnology and the law. Chapters examine such topics as national cloning and xenotransplant policies, the politics of stem cell research in Britain, Germany, and Italy, DNA profiling and DNA databases in criminal law, clinical trials in India and the United States, the GM crop controversy in Britain, and precautionary policymaking in the European Union. These cases demonstrate changes of constitutional significance in the relations among human bodies, selves, science, and the state.