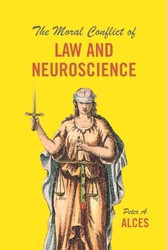 Moral Conflict of Law and Neuroscience

Moral Conflict of Law and Neuroscience

Law relies on a conception of human agency, the idea that humans are capable of making their own choices and are morally responsible for the consequences. But what if that is not the case? Over the past half century, the story of the law has been one of increased acuity concerning the human condition, especially the workings of the brain. The law already considers select cognitive realities in evaluating questions of agency and responsibility, such as age, sanity, and emotional distress. As new neuroscientific research comprehensively calls into question the very idea of free will, how should the law respond to this revised understanding????????????Peter A. Alces considers where and how the law currently fails to appreciate the neuroscientific revelation that humans may in key ways lack normative free will-and therefore moral responsibility. The most accessible setting in which to consider the potential impact of neuroscience is criminal law, as certain aspects of criminal law already reveal the naivet of most normative reasoning, such as the inconsistent treatment of people with equally disadvantageous cognitive deficits, whether congenital or acquired. But tort and contract law also assume a flawed conception of human agency and responsibility. Alces reveals the internal contradictions of extant legal doctrine and concludes by considering what would be involved in constructing novel legal regimes based on emerging neuroscientific insights.