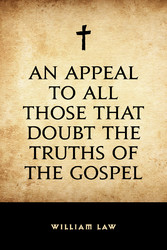 OF ETERNAL AND TEMPORAL NATURE. How Nature is from God, and the Scene of his Action. How the Creatures are out of it. Temporal Nature created out of that which is eternal. The fallen Angels brought the first Disorders into Nature. This World created to repair those Disorders. Whence Good and Evil is in every Thing of this World. How Heaven and Hell make up the Whole of this World. How the Fire of this World differs from eternal Fire; and the Matter of this World from the Materiality of Heaven. Eternal Nature is the Kingdom of Heaven, the beatific Manifestation of the triune God. God is more Love and Goodness. How Wrath and Anger come to be ascribed to him. Of Fire in general. Of the Unbeginning Fire. Of the Spirituality of Fire. How Fire comes to be in material Things. Whence the Possibility of kindling Fire in the Things of this World. Every Man is, and must be the Kindler of his own Eternal Fire, &c.

[App-2-1] Was there no nature, there could be no creature, because the life of every creature is, and can be nothing else, but the life of that nature out of which it was created, and in which it has its being. Eternal beings must have their qualities, nature, form and manner of existence out of eternal nature, and temporal beings out of temporary nature: was there no eternity, there could be no time, was there nothing infinite, there could be nothing finite; therefore we have here two great fundamental truths that cannot be shaken; first, that there is, and must be, an eternal nature; because there is a nature that is temporary, and that it must be that to eternal creatures, which temporal nature is to temporal creatures: secondly, that everywhere, and in all worlds, nature must stand between God and the creature, as the foundation of all mutual intercourse; God can transact nothing with the creature, nor the creature have any communion with God, but in, and by that nature, in which it stands.

[App-2-2] I hope no one will here ask me for scripture proofs of this, or call these truths nostrums, because they are not to be found in the same form of expression in some particular text of scripture. Where do the holy writings tell us, that a thing cannot be, and not be at the same time? Or that every consequence must arise from premises? And yet the scripture is continually supposing both these truths, and there could be no truth in the scripture, or anywhere else, if these things were not undeniable.

[App-2-3] There is nothing said of man throughout all scripture, but what supposes him to stand in nature, under a necessity of choosing something that is natural, either life or death, fire or water. There is nothing said of God with relation to creatures, but what supposes him to be the God of nature, manifesting himself in and through nature, calling, assisting and directing everything to its highest natural state. Nature is the scene of his providence, and all the variety of his governing attributes display themselves by his various operations in and through nature: therefore it is equally certain, that what God does to any creature, must be done through the medium of nature, and also what the creature does toward God, must be done in and through the powers of that nature in which it stands. No temporary creature can turn to God, or reach after him, or have any communication with him, but in, and according to that relation which temporary nature bears to God; nor can any eternal beings draw near to, or unite with God in any other manner, than that in which eternal nature is united with him. Would you know, why no omnipotence of God can create temporal animals but out of temporary nature, nor eternal animals but out of eternal nature; it is because no omnipotence of God can produce a visible triangle, but out of, and by three visible lines; for, as lines must be before there can be any lineal figures, so nature must be before there can be natural creatures.

[App-2-4] 2. Everything that is in being, is either God, or nature, or creature; and everything that is not God, is only a manifestation of God; for as there is nothing, neither nature, nor creature, but what must have its being in, and from God, so everything is, and must be according to its nature, more or less a manifestation of God. Everything therefore, by its form and condition, speaks so much of God, and God in everything, speaks and manifests so much of himself. Temporary nature is this beginning, created system of sun, stars, and elements; ‘tis temporary nature, because it begins and hath an end, and therefore is only a temporary manifestation of God, or God manifested according to transitory things.

[App-2-5] 3. Properly and strictly speaking, nothing can begin to be: the beginning of everything is nothing more, than its beginning to be in a new state. Thus time itself does not begin to be, but duration, which always was, began to be measured by the earth’s turning round, or the rising and setting of the sun, and that is called the beginning of time, which is, properly speaking, only the beginning of the measure of duration: thus it is with all temporal nature, and all the qualities and powers of temporal beings that live in it: no quality or power of nature then began to be, but such qualities and powers as had been from all eternity, began then to be in a new state. Ask what time is, it is nothing else but something of eternal duration become finite, measurable, and transitory? Ask what fire, light, darkness, air, water, and earth are; they are, and can be nothing else, but some eternal things become gross, finite, measurable, divisible, and transitory? For if there could be a temporal fire that did not spring out of eternal fire, then there might be time that did not come out of eternity.

[App-2-7] Figures, and their relations, did not then begin to be, when material circles and squares, &c., were first made, but these figures and relations began then to appear in a lower state than they had done before: and so it must be said of all temporal nature, and everything in it. It is only something of eternal nature separated, changed, or created into a new, temporary state and condition.

[App-2-8] 4. Now it may be asked, why was eternal nature thus degraded, debased, and changed from its eternal state of perfection? Will anyone say, that God of his own free will changed eternal nature, which is the glorious manifestation of his power and godhead, the seat of his holy residence, his majestic kingdom of heaven, into this poor, miserable mixture of good and evil, into this impure state of division, grossness, death, and darkness? No. It is the highest of all absurdities, to say so. Now, we sufficiently know from scripture, that a whole hierarchy, or host of angels, renounced their heavenly life, and thereby raised up a kingdom that was not heavenly. Could they not have inflamed and disordered outward nature in which they lived, they could not have destroyed the heavenly nature in themselves: for everything must be according to the state of that world in which it lives; and therefore, the state of outward nature, and the state of inward nature in the angels must stand and fall together; and as sure as a whole kingdom of angels lost their heavenly life, so sure it is, that their whole kingdom lost its heavenly state and condition: and therefore, it is an undeniable truth, founded on scripture evidence, that same part of eternal nature was changed from its first state of glory and perfection, before the creation of temporary nature; therefore, in the creation of this poor, gross, disordered, perishable, material world, one of these two things was done, either God took the spoiled part of heaven or eternal nature, and created it into this temporary state of good and evil; or he degraded, and brought down some part of the kingdom of heaven from its glory and perfection, into this mixture of good and evil, order and disorder in which the world stands. He could not do this latter, without bringing evil into nature, as the devil had done, and therefore we may be sure he did not do it; but if he did the former, then the creation of this lower world, was a glorious act, and worthy of the infinite goodness of God, it was putting an end to the devil’s working evil in nature, and it was putting the evil that was brought into nature, in a way of being finally overcome, and turned into good again. Will anyone now call these things whimsical speculations? Can anything be thought of more worthy of God, more conformable to nature, or more consonant to all revealed religion? But perhaps you will say, how could the angels spoil or destroy that glorious kingdom of eternal nature in which they dwelt. It may be answered, how could it possibly be otherwise? How could they live in eternal nature, unless nature without them, and nature within them, mutually mixed and qualified with each other? Would you have such...