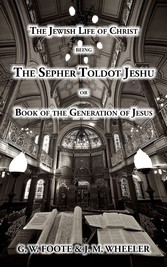 
When we first announced our intention of publishing
a translation of this work, we were unaware that it had ever appeared in
English before it was inserted in the New York Truthseeker by 'Scholasticus.'
This able and learned writer, who has since published his translation, with
other highly interesting matter, under the title of 'Revelations of Antichrist
concerning Christ and Christianity,' (Boston: J. P. Mendum.-New York: D. M.
Bennett; 1879) supposed that he was the first who introduced it to the
English-speaking world. He was, however, mistaken. We have quite recently
lighted on a translation published by Richard Carlile in 1823. It was done by a
Jew, who stated that it had 'never before been wholly translated into any modern language.' He appears to
have been right in this statement, as the earliest continental translation we
can trace is in German, and was published at Stuttgart in 1850, in a volume
together with the Apocryphal Gospels, by Dr. R. Clemons. No copy of the Richard
Carlile edition (the Hebrew translator does not give his name) is to be found
in the British Museum. It is a sixteen-page octavo pamphlet, with an Editor's
Preface, probably by Carlile himself, and a Dedication by the translator 'To
the Clergy of the Church of England.' His English text is substantially the
same as that now published. Some of its phrases are rough and
racy, possibly owing to his strict adherence to the original; and instead of
veiling in Latin the amours of Pandera and Miriam, he relates them in plain
English, with Biblical naïvité.


The Sepher Toldoth Jeshu was
first published in Latin, with the Hebrew text in parallel columns, by J. C.
Wagenseil in his 'Tela Ignea Satanae,' a collection of Jewish Anti-Christian
tracts, all translated into Latin, with attempted refutations. To collect these
valuable tracts, Wagenseil travelled widely through Spain and into Africa,
where the chief centres of Jewish learning then existed. His work was published
at Altdorf in 1681.