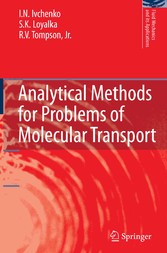 The Kinetic Theory of Gases has applications in many areas of science and technology as well as in our understandings of many natural processes and phenomena from the nano-scale up to the cosmic-scale. Some of the fields and topics affected include manufacturing, health care, weather, defence, pollution, aerospace science and engineering, and others. In particular, the interactions of rarefied gases with surfaces are of great interest because such interactions can have pronounced effects on the behaviour exhibited by those systems in all of the above fields. Such fundamental things as the transfer of mass, momentum, and energy between the components of a system can be significantly altered by such interactions. Collectively this transfer is typically described in terms of Rarefied Gas Dynamics and Transport Theory which generally go hand-in-hand with the Kinetic Theory of Gases. When this transport involves small particles suspended in a gas such as air, it is typically termed Aerosol Mechanics. Thus, this book should prove to be a very useful tool in virtually all application areas involving the Kinetic Theory of Gases, Rarefied Gas Dynamics, Transport Theory, and Aerosol Mechanics. This book is designed to serve a dual function. It is intended that it be capable of serving as a teaching instrument, either in a classroom environment or independently, for the study of basic analytical methods and mathematical techniques that may be used in the Kinetic Theory of Gases and is primarily suitable for use in graduate level physics and engineering courses on the subject. This book should also prove to be useful as a reference for scientists and engineers working in the fields of Rarefied Gas Dynamics and Aerosol Mechanics. In addition, the material in this book may prove to be of interest to individuals working in such areas as Physical Chemistry, Chemical Engineering, or any other applied discipline in which gas-surface interactions can be expected to play a significant role.