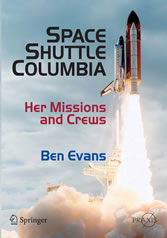 On February 1st 2003, one of the worst and most public disasters ever witnessed in the human space programme unfolded with horrifying suddenness in the skies above north central Texas. The Space Shuttle Columbia - the world's first truly reusable manned spacecraft - was lost during her return to Earth, along with a crew of seven. It was an event that, after the loss of Space Shuttle Challenger during a launch 17 years before, the world had hoped it would never see again. This book details each of Columbia's 28 missions in turn, as told by scientists and researchers who developed and supported her many payloads, by the engineers who worked on her and by the astronauts who flew her. In doing so, it is intended to provide a fitting tribute to this most remarkable flying machine and those who perished on her last mission.