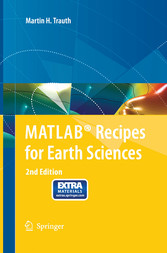 MATLAB® is used in a wide range of applications in geosciences, such as image processing in remote sensing, generation and processing of digital elevation models and the analysis of time series. This book introduces methods of data analysis in geosciences using MATLAB such as basic statistics for univariate, bivariate and multivariate datasets, jackknife and bootstrap resampling schemes, processing of digital elevation models, gridding and contouring, geostatistics and kriging, processing and georeferencing of satellite images, digitizing from the screen, linear and nonlinear time-series analysis and the application of linear time-invariant and adaptive filters. The revised and updated Second Edition includes new subchapters on windowed Blackman-Tukey, Lomb-Scargle and Wavelet powerspectral analysis, statistical analysis of point distributions and digital elevation models, and a full new chapter on the statistical analysis of directional data. The text includes a brief description of each method and numerous examples demonstrating how MATLAB can be used on data sets from earth sciences. All MATLAB recipes can be easily modified in order to analyse the reader's own data sets.


Martin Trauth, born in Landau/Pfalz in 1963, studied geophysics and geology at the University of Karlsruhe. He obtained a doctoral degree at Kiel University in 1995 and then became a permanent staff scientist and lecturer at the University of Potsdam. After his habilitation in 2003, he received the venia legendi for geosciences and the status of privatdozent at this university. Since 1990, he has worked on various aspects of past climate changes in East Africa and South America. His projects aim to understand the role of the tropics in terminating ice ages, the relationship between climate changes and human evolution, and the influence of climate anomalies on mass movements in the Central Andes. All these projects include the application of numerical and statistical methods using MATLAB®, such as time-series analysis and signal processing on paleoclimate time series, lake-balance modeling, stochastic modeling of bioturbation and image processing on laminated sediments. For more than ten years, Martin Trauth has taught various courses on data analysis in earth sciences at the University of Potsdam and other European universities.