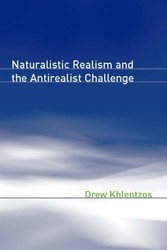 Naturalistic Realism and the Antirealist Challenge

Naturalistic Realism and the Antirealist Challenge

In this important book, Drew Khlentzos explains the antirealist argument from a realist perspective. He defends naturalistic realism against the antirealist challenge, and he considers the consequences of his defense for our understanding of realism and truth. Khlentzos argues that the naturalistic realist view that the world exists independently of the mind must take into consideration what he calls the representation problem: if the naturalistic realist view is true, how can mental representation of the world be explained?He examines this major antirealist challenge in detail and shows that many realists have dismissed it because they have not understood its nature. He sees it as a philosophical puzzle: the antirealist challenge, if sound, does not prove that there are no objects that exist independently of the mind, but that there is no rational basis for thinking that there are, we have good reason to believe in the naturalistic view, but (given the antirealist arguments) we have no way of knowing how it could be true. Khlentzos surveys the antirealist arguments of Michael Dummett, Hilary Putnam, and Crispin Wright and suggests a realist answer. He argues for a radically nonepistemic conception of truth, and against pragmatist, intuitionist, verificationist, and pluralist alternatives. He examines and rejects some current versions of physicalism and functionalism, and offers an original version of the correspondence theory of truth.