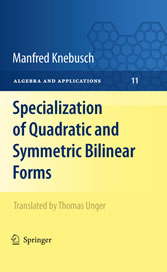 A Mathematician Said Who Can Quote Me a Theorem that's True? For the ones that I Know Are Simply not So, When the Characteristic is Two! This pretty limerick ?rst came to my ears in May 1998 during a talk by T.Y. Lam 1 on ?eld invariants from the theory of quadratic forms. It is-poetic exaggeration allowed-a suitable motto for this monograph. What is it about? At the beginning of the seventies I drew up a specialization theoryofquadraticandsymmetricbilinear formsover ?elds[32].Let? : K? L?? be a place. Then one can assign a form? (?)toaform? over K in a meaningful way ? if? has 'good reduction' with respect to? (see§1.1). The basic idea is to simply apply the place? to the coe?cients of?, which must therefore be in the valuation ring of?. The specialization theory of that time was satisfactory as long as the ?eld L, and therefore also K, had characteristic 2. It served me in the ?rst place as the foundation for a theory of generic splitting of quadratic forms [33], [34]. After a very modest beginning, this theory is now in full bloom. It became important for the understanding of quadratic forms over ?elds, as can be seen from the book [26]of Izhboldin-Kahn-Karpenko-Vishik for instance. One should note that there exists a theoryof(partial)genericsplittingofcentralsimplealgebrasandreductivealgebraic groups, parallel to the theory of generic splitting of quadratic forms (see [29] and the literature cited there).