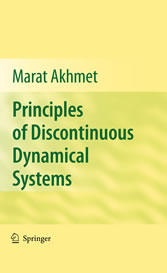 Discontinuous dynamical systems have played an important role in both theory and applications during the last several decades. This is still an area of active research and techniques to make the applications more effective are an ongoing topic of interest. Principles of Discontinuous Dynamical Systems is devoted to the theory of differential equations with variable moments of impulses. It introduces a new strategy of implementing an equivalence to systems whose solutions have prescribed moments of impulses and utilizing special topologies in spaces of piecewise continuous functions. The achievements obtained on the basis of this approach are described in this book. The text progresses systematically, by covering preliminaries in the first four chapters. This is followed by more complex material and special topics such as Hopf bifurcation, Devaney's chaos, and the shadowing property are discussed in the last two chapters. This book is suitable for researchers and graduate students in mathematics and also in diverse areas such as biology, computer science, and engineering who deal with real world problems.