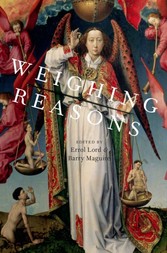 In recent decades normative reasons-considerations that count in favor of one thing or another-have come to the theoretical fore in ethics and epistemology. A major attraction of normative reasons is that they have weight or strength. Reasons are particular considerations that count in favor of actions or attitudes to some degree. This feature is attractive to theorists who want to explain more complex normative phenomena in terms of a notion that is weighted. This volume aims to provide the beginnings for a theory of weight. The fourteen new essays fall into three groups. One set of essays addresses questions about the nature of weight. Topics include the relations between reasons and conditions and modifiers, between reasons and other weighted notions such as commitments, and different models of the interaction of reasons. A second set of essays addresses substantive questions: questions about weight relevant to value-first, desire-first, evidence-first and other normative research programs. A third set of essays applies issues in the theory of weight to broader ethical debates. The book thus not only makes novel contributions to debates in ethics and epistemology about the nature of normative reasons and their weight, it also makes a strong case for the theoretical fruitfulness of the ideology of normative reasons.