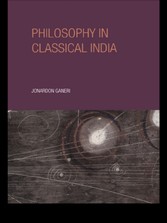 Philosophy in Classical India - An Introduction and Analysis

Philosophy in Classical India - An Introduction and Analysis

This original work focuses on the rational principles of Indian philosophical theory, rather than the mysticism more usually associated with it. Ganeri explores the philosophical projects of a number of major Indian philosophers and looks into the methods of rational inquiry deployed within these projects. In so doing, he illuminates a network of mutual reference, criticism, influence and response, in which reason is used to call itself into question. This fresh perspective on classical Indian thought unravels new philosophical paradigms, and points towards new applications for the concept of reason.