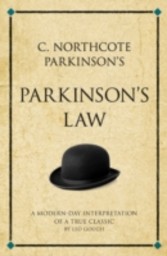 Cyril Northcote Parkinson's insightful book demonstrates his witty and acerbic panache for bringing to light the absurdity of every day life. Working around the premise 'work expands so as to fill the time available for its completion' Parkinson explores the realities of human behaviour within a bureaucracy. He doesn't theorise, but instead writes about how people truly function in organisations. Clever, funny and revealing, Parkinson's law is as relevant now as it was in 1958 when it was originally released. Here, Leo Gough's interpretation of Parkinson's law illustrates the timeless nature of C. Northcote Parkinson's insights by bringing them to life through modern case studies. This brilliant interpretation is an entertaining accompaniment to one of the most famous books ever written.