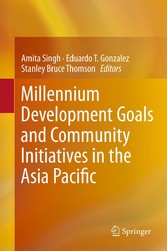 Millennium Development Goals and Community Initiatives in the Asia Pacific

Millennium Development Goals and Community Initiatives in the Asia Pacific

The book brings together implementation studies from the Asia Pacific countries in the context of the deadline of 2015 for achieving the Millennium Development Goals. The contributors to this volume are scholars belonging to the Network of Asia Pacific Schools and Institutes of Public Administration and Governance (NAPSIPAG). NAPSIPAG is the only non-West governance research network presently located at Jawaharlal Nehru University, New Delhi after having shifted from its original location at INTAN (Government of Malaysia) at Kuala Lumpur in 2009. 'Implementation' is a less understood but a much debated area of governance research. It requires micro-level analysis of government agencies, service delivery departments and stakeholders on one hand and its national and global policy level connections on the other. Implementation studies are above disciplinary divides and subsequent disjunctions which inhibit explorations on policy downslides or failures. The studies relate to the new initiatives which governments across the region have undertaken to reach out to the MDG targets agreed upon in 2000. The focus of analysis is the policy framework, local capacities of both the government agencies and people in drawing partnerships with relevant expert groups, ability to bring transparency and accountability measures in transactions for cost-effective results, leadership and sustainability dimensions which influence the functioning of local agencies. The book is especially important in the background of 15 voluminous Administrative Reforms Commission Reports accumulating dust in India and similar efforts lying unattended in many other countries of this region as well. Countries like Malaysia, which has focused upon 'implementation strategies' combined with timely evaluation and supervision of administrative agencies has almost achieved most of their committed MDGs. A special report of Malaysian efforts, initiates the debate of moving beyond the 'best practice research' in implementation arena. The central idea of this book is to demonstrate the role of communities in making governance effective and government responsive to the needs of people.


Amita Singh is a Professor at the Centre for the Study of Law and Governance, Jawaharlal Nehru University, New Delhi, India. She is also the Secretary General of Network of Asia-Pacific Schools and Institutes on Public Administration and Governance (NAPSIPAG). She specialised in the field of Political Theory and Public Administration. She also works in the area of environmental policy and administrative reforms specifically into an ecological approach to reforms. With an attempt to study an integrated implementation of land, forests, communities and water management programmes within administrative reforms. She is presently involved into a study of administrative innovations and best practices including e-governance measures required to accelerate pro-poor governance. In addition to contributing various articles in different journals, she is the joint editor of Strengthening Governance in the Asia Pacific (2010), and Governance and Poverty Reduction, Beyond the Cage of Best Practices (2009).
Eduardo T. Gonzalez is a Professor at the Asian Center, University of the Philippines.  He was former President of the Development Academy of the Philippines, in which he still serves as Senior Fellow.  He is Senior Editor of Asian Politics and Policy, an international journal of public policy published by Wiley-Blackwell.  He has authored studies on governance and institutions in Southeast Asia, the political economy of corruption, urban decentralization, corporate governance, and policy transfers in the Philippines.  His fields of specialization include public policy analysis, political economy, productivity and quality management, institutional analysis, and urban and regional planning.
S. Bruce Thomson is an Associate Professor in the Department of Business and management Studies at St. Georges University. His primary research focus is diversity management with a particular interest in religion in the workplace and how employees manage the religious diversity of their coworkers. Other research interests include strategic human resource management, human resource management in China, job turnover, ethics and qualitative research methods. His work has been published in several international academic journals including Human Resource Management, International Journal of Human Resource Management, International Journal of Human Resources Development and Management and Qualitative Inquiry.