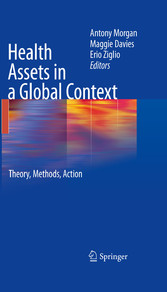 As global health inequities continue to widen, policymakers are redoubling their efforts to address them. Yet the effectiveness and quality of these programs vary considerably, sometimes resulting in the reverse of expected outcomes. While local political issues or cultural conflicts may play a part in these situations, an important new book points to a universal factor: the prevailing deficit model of assessing health needs, which puts disadvantaged communities on the defensive while ignoring their potential strengths. The asset model proposed in Health Assets in a Global Context International Health and Development offers a necessary complement to the problem-focused framework by assessing multiple levels of health-promoting aspects in populations, and promoting joint solutions between communities and outside agencies. The book provides not only rationales and methodologies (e.g., measuring resilience and similar elusive qualities) but also concrete examples of asset-based initiatives in use across the world on the individual and community levels.

Maggie Davies
Maggie Davies is the Principal Advisor on International Health Improvement at the Department of Health, England. She is on secondment from the National Institute of Health and Clinical Excellence (NICE) where she is Associate Director of Development. Maggie is also the lead tutor on the Distance Learning MSc in Health Promotion for the London School of Hygiene and Tropical Medicine. Maggie is President of the Pan-European network Eurohealthnet, which deals with equity and health issues, and is Global Vice President for Conferences for the International Union of Health Promotion and Education.
Previously a lecturer in semiotics, Maggie has over 20 years experience of work in the field of public health which has ranged from managing local services to large-scale international projects. This includes work for organisations such as World Health Organization (WHO) and the World Bank.
Maggie has also been a volunteer for non-government agencies and has been a Director of the Terrence Higgins Trust and Rape Crisis, Croydon.
Maggie has a record of publication in the field and most recently has edited two books for the Oxford University Press on Health Promotion Theory and Practice.
Maggie has post graduate qualifications in health management and is a fellow of the Faculty of Public Health.
Antony Morgan
Antony Morgan is an Epidemiologist and is currently an Associate Director at the Centre for Public Health Excellence, National Institute for Health and Clinical Excellence (NICE), England. Originally an applied chemist, Antony later trained in information science and epidemiology and has worked in Public Health in the English NHS for the last 25 years, at district, regional and national level. Antony is a Fellow of the UK Faculty of Public Health and has Honorary Research Appointments at the Universities of Hertfordshire and Edinburgh. At NICE he is currently responsible for producing public health guidance across a range of public health topic areas, including inequalities, community engagement, mental well being and children, and sexual health. Special areas of research interest and expertise include social action for health (using the concept of social capital); assets approaches to health and development (particularly in relation to adolescent health) and new methodologies for building an evidence base on the social determinants of health. Antony is currently the Principal Investigator for England on the World Health Organization (WHO) Health Behaviour in School Aged Children Study.
Erio Ziglio
Dr Erio Ziglio is currently Head of the World Health Organization (WHO) European Office for Investment for Health and Development in Venice. He has worked for over 15 years in the academic world both in Europe and in North America. Between 1978 and 1990, he lectured for the Department of Social Policy at the University of Edinburgh and carried out research at the University's Research Unit in Health and Behavioural Change. In 1985, he was awarded his PhD at the University of Edinburgh.
In North America he was Visiting Professor at the University of Toronto, Department of Community Medicine (1983) and at Carlton University, Department of Social Studies, Ottawa, (1986). Dr Ziglio was also a member of the International Faculty of the School of Public Health at Yale University from 1996 to 2003.
Dr Ziglio has lectured internationally and published widely on subjects such as: health promotion; health policy and planning; social determinants of health; health inequities and health and development issues. He held an Honorary Professorship from the University of York, and has been an Honorary Research Fellow at the University of Edinburgh.
In the late 1980s he worked for three years as a Public Health Consultant for the European Commission in the early 1990s, joined the WHO Regional Office for Europe in Copenhagen taking on responsibility for Health Promotion and the Investment for Health Programme. Since 2002, Dr Ziglio has headed the WHO European Office for Investment for Health and Development in Venice.
During his professional career he has had the opportunity to conduct extensive field work in many countries, including the United Kingdom, USA, Canada, Finland, Slovenia, Hungary, Romania, Czech Republic, Malta, Spain, Portugal, Italy and Brazil. Dr Ziglio's work has been published and translated into several languages including English, German and Italian.