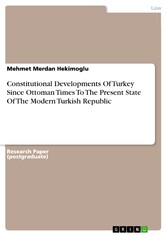 I. The start of the Turkish national liberation war period

After the Mudros Armistice (30th October 1918) signed between the Ottoman Empire and the Allies, the winners of the First World War began occupying a significant portion of the country.[198] However, Article 7 of the Armistice gave any of the Allies only “the right, to occupy any strategic points in the event of a situation arising which threatens the security of the Allies”.[199] A great resistance movement against the unlawful occupation has emerged both in Anatolia and Rumelia.[200] Istanbul government remained silent in the face of all these developments. Moreover, the government of the last Sultan Vahdettin (Mehmet VI, 1861-1926)[201] even though reluctantly accepted on 10 April 1920[202] the treaty of Sèvres,[203] which has divided the Ottoman’s country between the imperial powers. This submissive attitude against the occupation has further strengthened the opposition. This national resistance movement and the process of the Turkish national Independence War were started organizing by Mustafa Kemal (Ataturk), after his arrival in Samsun city in the Black Sea on 19 May 1919.[204] First of all Mustafa Kemal Pasha’s declaration in the Amasya circular (Turkish: Amasya Genelgesi or Amasya Tamimi) of 21-22.06 1919 issued in Amasya city located in the Black Sea Region, stressed the necessity for a national will and determination of the Turkish nation to save the independence of the nation.[205] This was followed by the National Congress of Erzurum consisted of the delegates from the eastern provinces[206] and held in Erzurum city located in eastern part of Turkey. According to the declaration of the Erzurum Congress opened and continued in session from 23 July to 17 August 1919,[207] were “the entire country within its [undefined] national frontiers is an undivided whole” and that any foreign act of forcefully taking possession of a Turkish area would be opposed forcefully.[208] After the Erzurum Congress, the delegates of the whole country[209] were called to Sivas located on the east part of Central Anatolia for another congress to be taken place 4-13 September 1919.[210] It refined the terms made use of the Erzurum Congress,[211] but this time in the national scale.

In the face of this resistance, the Istanbul Government had to be allowed parliamentary elections to do.[212] Those advocating for a national liberation war have won elections by a large majority.[213] The principles and resolutions of the Erzurum and Sivas Congress, known as the Misak-i Milli (National Pact), which form the basis of the Turkish national liberation movement, were adopted on January 28, 1920 by Parliament (Turkish Meclis-i Mebusan) in Istanbul, became unable to work anymore.[214] After a short time Istanbul was occupied by the English and the dissolved parliament by the Ottoman Government in time, which headed Damat Ferit Pasha in collaboration with the English.[215]

The content of the Constitution of 1921 can be summarized as follows: The principle of national sovereignty was adopted firstly in the Turkish constitutional history (article 1). Thus, the basic principle of the republic regime has been introduced.[224] For the principle of popular sovereignty and supremacy of Parliament stood in opposition to a monarchical form of government.[225] A system of unity of state powers and an assembly government system were established by the Constitution.[226] In this frame the exercise of the national sovereignty was exclusively to the Great National Assembly of Turkey, which united the legislative and executive powers in it (article 2). The government was titled as "the Government of Grand National Assembly" and consisted of a parliamentary committee (article 3). The executive state function was exercised by the Parliamentary Committee through ministers directed and when necessary changed by the Grand National Assembly (article 8). However the Ministerial Committee had not a legal instrument against the Parliament like dissolving of it.[227] The Head of the Grand National Assembly, naturally headed at the same time the Council of Ministers, was granted a right to endorse the decisions of the Council of Ministers (article 9). According to an assembly government system, presidential authority was not foreseen.[228] Therefore the President of the Great National Assembly of Turkey had the functions and powers of a president.[229] There was not any provision for judicial body[230] and basic rights and freedoms in the Constitution of 1921. The short text of the Constitution prepared for the wartime would require it. Moreover, in accordance with an assembly government system, the Great National Assembly of Turkey also had a judicial function through the “independent courts” (Turkish İstiklal Mahkemeleri), whose members were selected from and by itself.[231] There are no special provisions in the Constitution regarding the abolition of the sultanate and the caliphate. For there were many parliament members in the Great National Assembly of Turkey supported the Caliphate and the Sultanate and such as provisions in the Constitution could have triggered new conflicts in the independent war.[232]

After the national independent war ended with a victory, the Great National Assembly of Turkey has declared the ending of the Ottoman Empire and the lifting of the Sultanate, retroactive to 16 March 1920, with two historical decisions dated 1-2 November 1922 and numbered 307-308.[233] The Great National Assembly of Turkey ratified the Peace Treaty of Lausanne between Turkey on the one side and the British Empire, France, Italy, Japan, Greece, Romania and the Serb-Croat-Slovene State on the other [234] on 23.08.1923.[235] After that the form of government of the Republic was enshrined in the Constitution of the 1921, under a constitutional amendment, by the newly elected, second Parliament on 29 October 1923.[236] The...