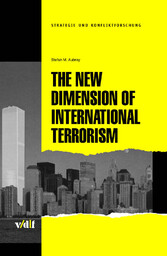 The New Dimensions of International Terrorism

The New Dimensions of International Terrorism

The events of September 11, 2001 confronted the United States and the rest of the World with the reality of a new dimension of international terrorism. This new dimension did not start nor end with the attacks against the World Trade Center or the Pentagon, but began in the 1990s.

This study examines the new dimension of international terrorism, contrasting it with the classical terrorism, the predominantly left-wing terrorist movements of the 1960s - 1980s in Europe, which were a subset of the bipolar geo-political arena. The author establishes the relationship of radical Islamist movements to the terrorist groups of the new dimension (principally focusing on Al-Qaeda) in providing the motivation for committing catastrophic terrorist acts, looks at the shadowy world of terrorist financing and makes suggestions regarding international counter-terrorist strategies.