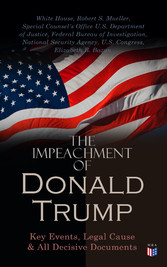 The Impeachment of President Trump: Key Events, Legal Cause & All Decisive Documents - The House of Representatives Impeachment Report, the Response of the Republicans & Other Documents

The Impeachment of President Trump: Key Events, Legal Cause & All Decisive Documents - The House of Representatives Impeachment Report, the Response of the Republicans & Other Documents

Since the beginning of his presidential term president Donald Trump is faced with constant criticism for his business projects in Russia and his connections with the Russian authorities. After the outbreak of the Trump-Ukraine scandal those allegations served as a foundation for initiating the impeachment procedure against the president. This book provides the complete overview of the impeach procedure against the president Donald Trump, including declassified documents, transcripts and reports of various US security agencies and governmental bodies involved in the investigation. Impeachment: An Overview of Constitutional Provisions, Procedure, and Practice Efforts to Impeach Donald Trump Documents & Transcripts Related to Impeachment Attempt Dismissal of James Comey James Comey FBI Farewell Letter Representative Al Green Calls for Trump Impeachment Jason Chaffetz Letter to FBI Over Comey Memo Legal Grounds for Appointing a Special Counsel The Jurisdiction and the Power of a Special Counsel Appointment of Special Counsel to Investigate Russian Interference With the 2016 Presidential Election and Related Matters Comey Statement for the Record Senate Select Committee on Intelligence Executive Order - Taking Additional Steps to Address the National Emergency With Respect to Significant Malicious Cyber-Enabled Activities Russian Cyber Activity - The Grizzly Steppe Report Assessing Russian Activities and Intentions in Recent US Elections Joint Statement on Committee Inquiry into Russian Intelligence Activities National Security Agency Report Letter From William Barr to Leaders of the House and Senate Judiciary Committees Notifying Them About Conclusion of the Investigation The Mueller Report