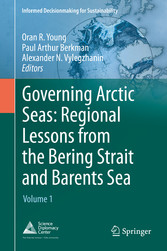 Governing Arctic Seas introduces the concept of ecopolitical regions, using in-depth analyses of the Bering Strait and Barents Sea Regions to demonstrate how integrating the natural sciences, social sciences and Indigenous knowledge can reveal patterns, trends and processes as the basis for informed decisionmaking. This book draws on international, interdisciplinary and inclusive (holistic) perspectives to analyze governance mechanisms, built infrastructure and their coupling to achieve sustainability in biophysical regions subject to shared authority.  Governing Arctic Seas is the first volume in a series of books on Informed Decisionmaking for Sustainability that apply, train and refine science diplomacy to address transboundary issues at scales ranging from local to global.  For nations and peoples as well as those dealing with global concerns, this holistic process operates across a 'continuum of urgencies' from security time scales (mitigating risks of political, economic and cultural instabilities that are immediate) to sustainability time scales (balancing economic prosperity, environmental protection and societal well-being across generations).  Informed decisionmaking is the apex goal, starting with questions that generate data as stages of research, integrating decisionmaking institutions to employ evidence to reveal options (without advocacy) that contribute to informed decisions. The first volumes in the series focus on the Arctic, revealing legal, economic, environmental and societal lessons with accelerating knowledge co-production to achieve progress with sustainability in this globally-relevant region that is undergoing an environmental state change in the sea and on land.  Across all volumes, there is triangulation to integrate research, education and leadership as well as science, technology and innovation to elaborate the theory, methods and skills of informed decisionmaking to build common interests for the benefit of all on Earth.

PAUL ARTHUR BERKMAN is Professor of Practice in Science Diplomacy at the Fletcher School of Law and Diplomacy at Tufts University and a Research Professor in the Marine Science Institute at the University of California Santa Barbara in the United States as well as Director of the Arctic Futures Initiative through the International Institute for Applied Systems Analysis in Austria. He has convened and co-chaired numerous international and interdisciplinary dialogues, including the: Antarctic Treaty Summit in Washington, DC on the 50th anniversary of the Antarctic Treaty (2009); NATO advanced research workshop that became the first formal dialogue between NATO and Russia regarding Arctic security (2010); and Workshop on Safe Ship Operations in the Arctic Ocean at the International Maritime Organization (2014). Among his books are: Environmental Security in the Arctic Ocean (Springer, 2012); Science Diplomacy: Antarctica, Science and the Governance of International Spaces (Smithsonian Institution Scholarly Press, 2011); Environmental Security in the Arctic Ocean: Promoting Cooperation and Preventing Conflict (Routledge, 2010); and Science into Policy: Global Lessons from Antarctica (Academic Press, 2002). Prof. Berkman has received the: Antarctic Service Medal from the United States Congress; NASA Faculty Fellowship at the Jet Propulsion Laboratory, California Institute of Technology; Byrd Fellowship at The Ohio State University; Japan Society for the Promotion of Science Fellowship at the National Institute of Polar Research in Japan; Erskine Fellowship in the Gateway Antarctica, University of Canterbury in New Zealand; and Fulbright Distinguished Scholarship at the University of Cambridge in the United Kingdom as well as being elected to the Norwegian Scientific Academy for Polar Research. Paul has a master's degree and doctorate in biological oceanography from the University of Rhode Island, where he was a National Science Foundation Graduate Fellow.
ALEXANDER N. VYLEGZHANIN, Doctor of Law, Professor, is a Head of the Program of International Law, Moscow State Institute of International Relations (MGIMO- University). He is currently elected as a Vice-president of the Russian Association of International Law and a Vice-President of the Russian Association of the Law of the Sea. He is nominated by the Russian Federation to the list of arbitrators according to Annex VII of UNCLOS. He is also elected as a Member of the Presidium of the Committee of Experts on the Arctic and Antarctic of the Council of Federation (the Upper Chamber of the Russian Parliament). His major interest include General International Law, International Law of the Sea, Legal Regimes of Natural Resources, and Boundaries the Arctic. He has publicized a wide array of books on international issues, mainly in Russian. Prof. Vylegzhanin was awarded a rank of Academician by the Russian Academy of Natural Sciences (2000), and a Medal by the Russian Academy of Natural Sciences (2001) for his book 'Legal Regime of Marine Natural Resources' (2001, in Russian).
ORAN R. YOUNG is a research professor at the Marine Science Institute and professor emeritus and co-director of the Program on Governance for Sustainable Development at the Bren School of Environmental Science & Management at the University of California (Santa Barbara). His research focuses on theories of environmental governance with applications to issues relating to climate change, marine systems, and the polar regions. He also does comparative research on environmental governance in China and the United States. Dr. Young served for six years as founding chair of the Committee on the Human Dimensions of Global Change of the US National Academy of Sciences. He chaired the Scientific Steering Committee of the international project on the Institutional Dimensions of Global Environmental Change (IDGEC). He was a founding co-chair of the Global Carbon Project and from 2005 to 2010 chaired the Scientific Committee of the International Human Dimensions Programme on Global Environmental Change. An expert on 3 Arctic issues, Dr. Young chaired the Steering Committee of the Arctic Governance Project and is the science advisor to the North Pacific Arctic Conferences. Past service in this realm includes co-chair of the Working Group on Arctic International Relations, member of the US Polar Research Board, founding board member of the Arctic Research Consortium of the United States, vice-president of the International Arctic Science Committee, chair of the Board of Governors of the University of the Arctic, consultant to the Standing Committee of Parliamentarians of the Arctic Region, and co-chair of the 2004 Arctic Human Development Report. He is the author of more than 20 books. His recent books include Institutional Dynamics: Emergent Patterns in International Environmental Governance (2010) and On Environmental Governance: Sustainability, Efficiency, and Equity (2013). His forthcoming book is entitled Governing Complex Systems: Sustainability in the Anthropocene.