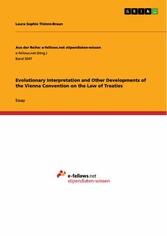 Essay from the year 2019 in the subject Law - European and International Law, Intellectual Properties, grade: 1,0, University of Vienna (Institut für Europa- und Völkerrecht), language: English, abstract: This essay is concerned with the ramifications of the interpretation of the Vienna Convention on the Law of Treaties. The Vienna Convention on the Law of Treaties, from now on referred to as VCLT, constitutes the 'bible' of international practitioners. Like the United Nations Charter, the widespread clarity and intelligence of its drafting have enabled States to comply with the rules and adapt their practice without distorting or departing from the VCLT. The rules provide an important framework which is flexible enough for States to accommodate alternatives, variations and even developments in their state practice. The provisions of the VCLT leave the states room for individual concretisation. Some commentators say the VCLT has had its day and is incapable of dealing with the challenges of the 21st century. However, the VCLT has proved itself to be a most adaptable tool, as it was able to deal with challenges of the past decades. In order to do so, the provisions of the VCLT were clarified, modified, developed, or amended. This paper aims at discussing the development of several selected provisions of the VCLT as well as analysing the new types of interpretation, such as the evolutionary interpretation. The difference between the original provisions and the present state of the law will be outlined in this paper.