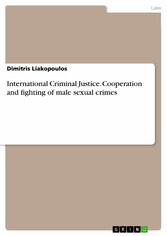 Document from the year 2019 in the subject Law - European and International Law, Intellectual Properties, Tufts University, language: English, abstract: The focus of this book is the analysis of male sexual crimes in international criminal justice. The first part of the present research work is focused on the legal analysis of the relevant articles of international criminal court's Statute regarding the obligation of cooperation between states for the punishment of serious crimes against humanity and war. Judicial development, starting with the ad hoc tribunals and arriving at causes at various stages of proceedings still ongoing in the International Criminal Court (ICC), opens doctrinal and comparative national debates especially in the case of lacking states cooperation, seeking to elaborate specific topics such as the obligation of states cooperation, requests for assistance during preliminary investigations,during inquires, and confidential information. Court assistance to states parties participating in the Statute, suspending the execution of a request, the role of the prosecutor and the non-assistance of some states impede the development and operation of international criminal justice. The second part has attempted to analyze sexual crimes and especially the crime of male rape.The jurisprudence of international criminal tribunals and the ICC have tried to qualify rapeeither as a crime of genocide in the form of serious and physical injuries, even if notnecessarily permanent (lett.b) Art.6 of the Rome Statute; or as a crime against humanity wherethere are elements of context and above all material elements that emerge from the defenitionsgiven by the ad hoc tribunals and the elements of crimes; or even as a war crime in case it isimplemented to that of sexual violence, according to a geneder specific relationship tospeciem. Judges through the jurisprudence have included in this context any conduct of asexual type of aggression to human dignity that does not consist in an act of penetration andthat does not involve physical contract. The contrasts are always open. Due to the lack ofdealing with a 'particular' crime and difficult to prove it or testify before an internationalcourt. The indication on the level of gravity of the crime is necessary for the relevance ofsexual violence and rape as crimes against humanity that we will see in the coming years.