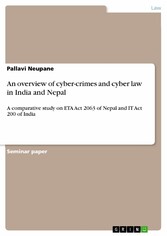 Seminar paper from the year 2016 in the subject Law - Comparative Legal Systems, Comparative Law, , language: English, abstract: This topic on 'An overview of cyber-crime, cyber law with comparative study on ETA 2063 of Nepal and IT Act 2000 of India' is very relevant in the present context of developing and developed economy such as Nepal and India respectively. Creating rules and laws binding on nations is a matter for international negotiations and mutual acceptance by governments. The strong nations have the power to make the rules in their favour and the authority to implement those rules. But, an undeveloped nation cannot bargain and is unable to afford these international sets of rules and policies. They are compelled but not compatible. In twenty first century the world has emerged as a global village and hence business, trades and all the international institutions, all the nations are being compelled to be a part of Cyberspace. In simple concerns, Cyberspace and cyber world are the most useful method for exercising the fundamental right of freedom of expression as in this world everybody has equal right to express their thoughts in front of large public, but this cyberspace has also been giving an open space for the cyber users to misuse the power of cyber world by giving the cyber users unauthorized access to infringe into the accounts of others.