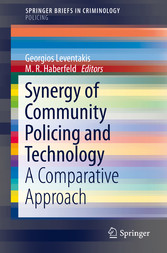 Synergy of Community Policing and Technology - A Comparative Approach

Synergy of Community Policing and Technology - A Comparative Approach

This brief examines the interaction and synergy between the philosophical concepts embedded in the ideas of Community Oriented Policing (C.O. P.) and urban security aided by technological innovations. While the philosophy of C.O.P. stresses the importance of collaboration between members of the public and its police forces technology that is becoming rapidly integrated in various police tactics creates new legal challenges and operational hurdles. This approach, coined as 'Next Generation Community Policing', is discussed through the chapters of the brief and illustrated with examples from a number of different countries and their approaches to this topic.
This Brief will be of interest to researchers in criminology and criminal justice, particularly in police studies, as well as related fields such as urban security planning and sociology.

Georgios Leventakis (PhD - MBA - MSc) is a qualified Security Expert. He holds a PhD in the area of Risk Assessment Modeling in Critical Infrastructure
(CI) Protection, an MBA, and an MSc in Risk Management. He has 22 years of professional experience in the public sector, of which 16 years are in security management. He has participated in several National, European, and International projects and initiatives, regarding physical security of critical infrastructures, border management (land and sea border surveillance), and civil protection/homeland security technology and operations. He has also participated in tender procedures for complex security systems, including command and control and decision support systems.
His research interests include social media platforms in community policing, risk assessment modelling in CI protection, smart borders applications and tools, and integrated border management solutions. Since 2006, he was the scientific coordinator of the Center for Security Studies - the Scientific, Advisory and Research Center of the Hellenic Ministry of Interior (KEMEA) - and participated in various European programmes funded by the European Commission. He has participated as senior researcher in more than 45 EU research projects, has authored several academic papers published in relevant journals, and has presented them at academic conferences.
Dr. Leventakis has worked and collaborated with many public safety and security agencies in Greece and abroad; from the execution phase of the Risk Management Program for the SYDNEY 2000 Olympic Games till more recently on the study carried out under the auspices of the Minister of Public Order and Citizen Protection in the field of 'Integrated Surveillance and Security System of Land and Sea Borders of Greece' - budget of € 60 million -  and the design and development of National Table Top and Operational Readiness Exercises.

He has been involved in the development of Threat Assessment and Vulnerability Assessment Studies, Operational Security Plans and Emergency Response Plans and Procedures, for the Protection of Vital Infrastructures and Governmental Buildings in Greece and EU.

Currently he has been assigned as Head of Division at the Civil Emergency Planning and Civil Protection division, within the Hellenic Parliament.

Maria (Maki) Haberfeld is a Professor of Police Science, in the Department of Law, Police Science and Criminal Justice Administration at John Jay College of Criminal Justice in New York City. She was born in Poland and immigrated to Israel as a teenager. She served in the Israel Defense Forces in a counter-terrorist unit and left the army at the rank of a sergeant. Prior to coming to John Jay she served in the Israel National Police and left the force at the rank of lieutenant. She also worked as a special consultant for the U.S. Drug Enforcement Administration in the New York Field Office.

She has conducted research in the areas of public and private law enforcement, police integrity, counter-terrorism and white-collar crime in the United States, Eastern and Western Europe and Israel. In addition to her research, she has also provided leadership and counter-terrorist training to a number of police agencies and military units across the United States and a number of countries around the world. Since 2001 she has been involved in developing, coordinating and teaching in a special educational program at John Jay for the New York City Police Department. She has recently developed an on-line Certificate for Law Enforcement Leadership offered by the John Jay College.
Since 2001 she has been involved in developing, coordinating and teaching in a special training program for the New York City Police Department, where she teaches courses in police ethics, leadership and counter-terrorism. For three years (2005-2008), she is was also an Academic Coordinator of the Law Enforcement Executive Police Institute for the State of New York, where she oversaw delivery of the training modules and taught leadership courses, In 20016 she has developed and currently also coordinates,  Law Enforcement Leadership Certificate on-line, offered by the John Jay College.
Her publications include three books on terrorism related issues: A New Understanding of Terrorism (co-editor, 2010), Modern Piracy and Maritime Terrorism (co-editor, 2012), Terrorism Within Comparative International Context (co-author, 2009), Russian Organized Corruption Networks and their International Trajectories (co-authored, 2011), Critical Issues in Police Training (2013), Police Organization and Training: Innovations in Research and Practice (co-edited, 2011) Police Leadership: Organizational and Managerial Decision Making Process (2012), Policing Muslim Communities (co-authored, 2012), Match-Fixing in International Sports (co-edited, 2013), Introduction to Policing: the Pillar of Democracy (co-authored, 2014, 2017) and Measuring Police Integrity across the World (co-edited, 2015).
She is also Series Editor of Springer Briefs in Policing.