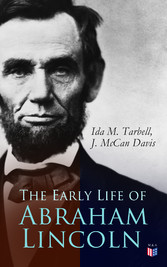 This book is a result of a thorough research conduct by the author Ida M. Tarbell. Tarbell's research in the backwoods of Kentucky and Illinois uncovered the true story of Lincoln's childhood and youth. She wrote to and interviewed hundreds of people who knew or had contact with Lincoln. She tracked down leads and then confirmed their sources. She sent hundreds of letters looking for images of Lincoln and found evidence of more than three hundred previously unpublished Lincoln letters and speeches.