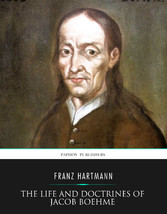 The Life and Doctrines of Jacob Boehme

The Life and Doctrines of Jacob Boehme

“Science cannot abolish faith in the all-seeing God, without worshipping in His place the blind intellect.”

“The true faith is that the spirit of the soul enters with its will and desire into that which it does neither see nor feel.” (Four Complexions, 85.)

It is self-evident that if we wish to attempt a contemplation of that which is divine and eternal, we must first of all not refuse to believe in the possibility that something divine and eternal exists or may reveal itself in the constitution of man. This spiritual principle in man is superior to the animal and reasoning man; superior to the material body, and superior to the arguing intellect; it does not need to reason and guess; it perceives and knows. Being superior to the intellect, it cannot be conceived intellectually; but it can be perceived by man if he rises above the animal and intellectual plane to the consciousness of his own divine spirit; or to express it in the language of Boehme, if he attains self-knowledge in Christ. The animal instincts in man belong to the animal nature in man, his intellectual faculties belong to his intellectual nature, but that which is divine in him belongs to his God, his own true and real and permanent self.

Merely theoretical speculation in regard to the things that belong to the Spirit in man is therefore entirely inadequate for their true understanding, and is not divine wisdom; it can only lead to the formation of theories and opinions about it, which may or may not be true, but which do not constitute real knowledge, while true wisdom is the result of practical experience, attainable in no other way than by entering the divine state. In other words, it is the knowledge by which God in “man” knows His own self.

Most surely the attainment of this divine state is not the result of fancy’s flights, of pious dreaming, or of allowing the imagination to run away with one’s self. There is nothing more positive, real, and practical than the consciousness of being a man, and to find one’s centre of gravity in the dignity which arises from true manhood; or in other words, from the knowledge of being a living temple wherein resides the power of one’s own immortal self.

Every state of knowledge has its uses in the sphere to which it belongs and not to any other. Jacob Boehme says:—

“I do not say that man should not investigate natural sciences, and gain experience in regard to external things. Such a study is certainly useful to him; but man’s own reasoning should not be the basis of his knowledge. Man should not have his conduct guided merely by the light of external reasoning, but he should, with all his reasoning and with his whole being, bow in deep humility before God.” (Calmness, i. 3 5.)

As long as a man does not recognise the existence of a divine principle within his own self, it will be of little use for him to philosophise and speculate about the attributes of the Divinity in the universe; he cannot know the Holy Ghost as long as the Spirit of Holiness is not active within himself.

“Natural man knows nothing about the mystery of the kingdom of God, because he is outside and not within the state of divinity, as is daily proved by the action of the philosophisers who are disputing about the attributes and the will of God, and who nevertheless do not know God, because they do not listen to the word of God within their own souls.” (Letters, xxxv. 5.)

External man judges according to his external reasoning. Man, depending entirely on his external perceptions, and having neither belief nor confidence in anything except what he sees with his bodily eyes, knows only that which he sees with those eyes, and is not aware that there is anything superior to that.

“When external reason beholds the things of this world, and how misfortunes befall the pious as well as the godless, and that all things are doomed to death and destruction—if it moreover perceives that there seems to be none to save the virtuous from trouble and grief, but that he, like the wicked, sorrowfully enters the valley of death, then man’s reason thinks that all things are due to hap-hazard, and that there is no God to take care of those that are suffering.” (Contemplation, i. 1.)

If there is no proof of the existence of a benevolent God to be found within the world of phenomena, there is likewise no divine self-knowledge to be obtained by the superficial reading of Holy Writ, nor by an external study of the Bible, or conceiving of its contents from a merely historical point of view. Neither will listening to sermons be productive of self-knowledge, if he who preaches or he who listens has not the living Spirit of Truth within himself.

“All those who desire to speak of or teach divine mysteries ought to be in possession of the Spirit of God. Man should recognise within himself the divine light of the truth, and in that light the things which he desires to represent as being true. He should never be without such a divine self-knowledge, and not make the force of his arguments to depend merely on external reasonings or literal interpretations of the Bible.” (Menschwerdung, i. 1, 3.)

“What would it benefit me if I were continually quoting the Bible, and knew the whole book by heart, but did not know the Spirit that inspired the holy men who wrote that book, nor the source from which they received their knowledge? How can I expect to understand them in truth, if I have not the same spirit as they? “(Tilk. ii. 55.)

Spiritual truths are above and beyond intellectual reasoning, and can, therefore, not be intellectually explained. They can at best be represented by allegories and pictures such as may induce men to give way to exalted thoughts, and thus to acquire a higher state of perception.

“The children of God spake as they were made to speak by the Holy Spirit. Therefore their words remain a mystery to the men of earth; and even if the latter imagine that they understand them, nevertheless they see only the external meaning.” (Letters, xi. 40.)

“In all things received by mere hearsay, without self-perception, there still remains a doubt as to whether that which one has heard is actually true; but that which is seen by the eye and understood by the heart carries conviction with it.” (Three Principles, x. 26.)

It should never be forgotten that speculative philosophy and theosophy are two entirely different, if not opposite things, and those who clamour for intellectual explanations of spiritual truths that are beyond intellectual reasoning have an entirely wrong conception of the meaning of the term “Theosophy.”

“The true understanding must come from the interior fountain and enter the mind from the living Word of God within the soul. Unless this takes place, all teaching about divine things is useless and worthless.” (Letters, xxxv. 7.)

“I do not wish to divert men from the Word as it is written and taught; but my writings are intended to lead them from a merely historical belief to a living faith, even to Jesus Christ (the Light and Truth) Himself. All preaching and teaching is in vain if it is mere talk, and if the preacher or teacher has not the power of Christ, if not Christ Himself by means of the Word acts within those that teach and within those that listen.” (Richter, 45.)

By studying a book we may at best imagine what the author believed; but such an imaginary knowledge is not self-knowledge. Real spiritual knowledge comes only from the awakening of the spirit.

“I am not collecting my knowledge from letters and books, but I have it within my own self; because heaven and earth with all their inhabitants, and moreover, God Himself, is in man.” (Tilk. ii. 297.)

The essential man is not limited by the visible physical form of his material body; his spiritual substance extends as far as the stars. His true self is the Spirit of God, wherein are existing all worlds.

“The spirit of man has not merely come from the stars and the elements, but there is hidden within him a spark of the light and the power of God. It is not empty talk if Moses (Genesis i.) says God created man in His own image. To be His own image created He him.” (Aurora, Preface, 96.)

The divine Spirit, once awakened in the consciousness of man, knows all things by the knowledge of its own self.

“The soul searches into the Godhead, and also into the depths of nature; for she has her fountain and origin in the whole of the divine Being.” (Aurora, Preface, 98.)

“As the eye of man reaches the stars wherefrom it has its primitive origin, likewise the soul penetrates and sees even within the divine state of being wherein she lives.” (Aurora, Preface, 99.)

“Oh, how near is God to all things. Nevertheless, no thing can comprehend Him unless it be tranquil and surrenders to Him its own self-will. If this is accomplished, then will God be acting through the instrumentality of everything, like the sun that acts throughout the whole world.” (Mystery, 45.)