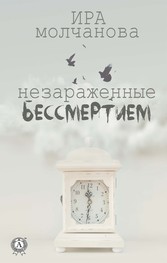 Whether from fatigue, or from an uncharacteristic human life span, Lohan is visited by visions. The girl, whom he increasingly sees as if in reality, falls in love with him. There is something in him that appeals to him so much that he makes it a guide to the future. Irrational love helps him to rest from exhausting research after the cells of his own body. Loehn stubbornly goes to the answer to his main question: how can he live so long? In the 20th century, both research tools and scientists are beginning to appear, which help Luan to understand the essence of the cellular mechanism and to understand the essence of telomerase. But these knowledge is not enough to understand the mechanism of immortality. The newest discovery of CRISPR comes to the aid of the immortal. The essence of the novel is that the virus of immortality, it should be perceived allegorically, can hit a person, but it is worth fighting with it to understand the true meaning of life and to want it when it's time to go where those who were and were loved are gone.