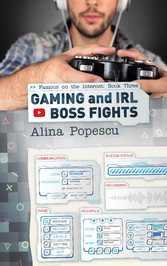 An internet famous geek. A sexy landlord who hates him. An unlikely duo with slim chances of beating the romance game.

Simon Cromfield's life seems perfect from the outside. His gaming channels made him an internet celebrity, he has great friends, and he's just moved into a luxurious apartment. Yet his gorgeous landlord did a one-eighty turn and decided he hates Simon, his family thinks he's a total failure, and some of his fans act like they own him.

Branden Dahlman has enough on his plate. He doesn't need that pest, Simon, who became the bane of Branden's existence on top of a large estate he never wanted and a family that drives him insane. As he unleashes his resentment on Simon, the sexy bastard insists on proving Branden wrong about everything.

In an unlikely turn of events, when Simon hits his lowest, Branden is there to support him. But will this new-found thing between them last when the pressures of Simon's world come crashing in?

Gaming and IRL Boss Fights is the third book in the contemporary gay romance series Famous on the Internet. If you like geeks, binge-watching online content, and enemies-to-lovers tropes, then you will love Alina Popescu's online celebrity protagonists.

Buy your copy of Gaming and IRL Boss Fights today to join the game.