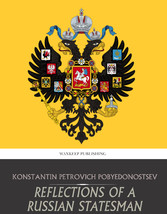 Reflections of a Russian Statesman

Reflections of a Russian Statesman

THAT WHICH IS FOUNDED ON falsehood cannot be right. Institutions founded on false principles cannot be other than false themselves. This truth has been demonstrated by the bitter experience of ages and generations.

Among the falsest of political principles is the principle of the sovereignty of the people, the principle that all power issues from the people, and is based upon the national will—a principle which has unhappily become more firmly established since the time of the French Revolution. Thence proceeds the theory of Parliamentarism, which, up to the present day, has deluded much of the socalled “ intelligence,” and unhappily infatuated certain foolish Russians. It continues to maintain its hold on many minds with the obstinacy of a narrow fanaticism, although every day its falsehood is exposed more clearly to the world.

In what does the theory of Parliamentarism consist? It is supposed that the people in its assemblies makes its own laws, and elects responsible officers to execute its will. Such is the ideal conception. Its immediate realisation is impossible. The historical development of society necessitates that local communities increase in numbers and complexity ; that separate races be assimilated, or, retaining their polities and languages, unite under a single flag, that territory extend indefinitely : under such conditions direct government by the people is impracticable. The people must, therefore, delegate its right of power to its representatives, and invest them with administrative autonomy. These representatives in turn cannot govern immediately, but are compelled to elect a still smaller number of trustworthy persons—ministers—to whom they entrust the preparation and execution of the laws, the apportionment and collection of taxes, the appointment of subordinate officials, and the disposition of the militant forces.

In the abstract this mechanism is quite symmetrical : for its proper operation many conditions are essential. The working of the political machine is based on impersonal forces constantly acting and completely balanced. It may act successfully only when the delegates of the people abdicate their personalities ; when on the benches of Parliament sit mechanical fulfillers of the people’s behests ; when the ministers of State remain impersonal, absolute executors of the will of the majority ; when the elected representatives of the people are capable of understanding precisely, and executing conscientiously, the programme of activity, mathematically expressed, which has been delivered to them. Given such conditions the machine would work exactly, and would accomplish its purpose. The law would actually embody the will of the people ; administrative measures would actually emanate from Parliament ; the pillars of the State would rest actually on the elective assemblies, and each citizen would directly and consciously participate in the management of public affairs.

Such is the theory. Let us look at the practice. Even in the classic countries of Parliamentarism it would satisfy not one of the conditions enumerated. The elections in no way express the will of the electors. The popular representatives are in no way restricted by the opinions of their constituents, but are guided by their own views and considerations, modified by the tactics of their opponents. In reality, ministers are autocratic, and they rule, rather than are ruled by, Parliament. They attain power, and lose power, not by virtue of the will of the people, but through immense personal influence, or the influence of a strong party which places them in power, or drives them from it. They dispose of the force and resources of the nation at will, they grant immunities and favours, they maintain a multitude of idlers at the expense of the people, and they fear no censure while they enjoy the support in Parliament of a majority which they maintain by the distribution of bounties from the rich tables which the State has put at their disposal. In reality, the ministers are as irresponsible as the representatives of the people. Mistakes, abuse of power, and arbitrary acts, are of daily occurrence, yet how often do we hear of the grave responsibility of a minister ? It may be once in fifty years a minister is tried for his crimes, with a result contemptible when compared with the celebrity gained by the solemn procedure.

Were we to attempt a true definition of Parliament, we should say that Parliament is an institution serving for the satisfaction of the personal ambition, vanity, and self-interest of its members. The institution of Parliament is indeed one of the greatest illustrations of human delusion. Enduring in the course of centuries the tyranny of autocratic and oligarchical governments, and ignoring that the evils of autocracy are the evils of society itself, men of intellect and knowledge have laid the responsibility for their misfortunes on their rulers and on their systems of government, and imagined that by substituting for these systems government by the will of the people, or representative government, society would be delivered from all the evils and violence which it endured. What is the result ? The result is that, mutato nomine, all has remained essentially as before, and men, retaining the weaknesses and failings of their nature, have transfused in the new institutions their former impulses and tendencies. As before, they are ruled by personal will, and in the interests of privileged persons, but this personal will is no longer embodied in the person of the sovereign, but in the person of the leader of a party ; and privilege no longer belongs to an aristocracy of birth, but to a majority ruling in Parliament and controlling the State.

On the pediment of this edifice is inscribed : “ All for the Public Good.” This is no more than a lying formula : Parliamentarism is the triumph of egoism— its highest expression. All here is calculated to the service of the ego. In the Parliamentary fiction, the representative, as such, surrenders his personality, and serves as the embodiment of the will and opinions of his constituents ; in reality, the constituents in the very act of election surrender all their rights in favour of their representative. In his addresses and speeches the candidate for election lays constant emphasis upon this fiction ; he reiterates his phrases about the public welfare ; he is nothing but a servant of the people ; he will forget himself and his interests for its sake. But these are words, words, words alone — temporary steps of the staircase by which he climbs to the height he aspires to, and which he casts away when he needs them no longer. Then, so far from beginning to work for society, society becomes the instrument of his aims. To him his constituents are a herd, an aggregation of votes, and he, as their possessor, resembles those rich nomads whose flocks constitute their whole capital —the foundation of their power and eminence in society. Thus is developed to perfection the art of playing on the instincts and passions of the mass, in order to attain the personal ends of ambition and power. The people loses all importance for its representative, until the time arrives when it is to be played upon again ; then false and flattering and lying phrases are lavished as before ; some are suborned by bribery, others terrified by threats — the long chain of manœuvres spun which forms an invariable factor of Parliamentarism. Yet this electoral farce continues to deceive humanity, and to be regarded as an institution which crowns the edifice of State. Poor humanity ! In truth may it be said : mundus vult decipi, decipiatur.

Thus the representative principle works in practice. The ambitious man comes before his fellowcitizens, and strives by every means to convince them that he more than any other is worthy of their confidence. What motives impel him to this quest? It is hard to believe that he is impelled by disinterested zeal for the public good.

In our time, nothing is so rare as men imbued with a feeling of solidarity with the people, ready for labour and self-sacrifice for the public good ; this is the ideal nature, but such natures are little inclined to come into contact with the baseness of the world. He who, in the consciousness of duty, is capable of disinterested service of the community does not descend to the soliciting of votes, or the crying of his own praise at election meetings in loud and vulgar phrases. Such men manifest their strength in their own work, in a small circle of congenial friends, and scorn to seek popularity in the noisy market-place. If they approach the crowd, it is not to flatter it, or to pander to its basest instincts and tendencies, but to condemn its follies and expose its depravity. To men of duty and honour the procedure of elections is repellent ; the only men who regard it without abhorrence are selfish, egoistic natures, which wish thereby to attain their personal ends. To acquire popularity such men have little scruple in assuming the mask of ardour for the public good. They cannot and must not be modest, for with modesty they would not be noticed or spoken of. By their positions, and by the parts which they have chosen, they are forced to be hypocrites and liars ; they must cultivate, fraternise with, and be amiable to their opponents to gain their suffrages ; they must lavish promises, knowing that they cannot fulfil them ; and they must pander to the basest tendencies and prejudices of the masses to acquire majorities for themselves. What honourable nature would accept such a rôle? Describe it in a novel, the reader...