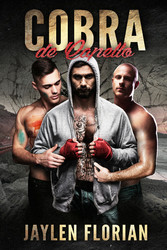 One night stands are nothing new for Zachary, a professional MMA fighter with a peculiar craving for amorous encounters.


But when lured and ambushed by a handsome kilted man in one of San Francisco's most exclusive hotels on Nob Hill, Zachary and his savvy bodyguard, Aleksey, scramble into hiding to unravel the mystery of the attack.


These men struggle to avoid capture, figure out who is hunting them, and determine who betrayed them.


Gustavo, a promising young painter, gets entangled in their journey.  Prior to witnessing an altercation among strangers near a secluded mountain trail in Los Angeles, Gustavo was secretly entrusted with a precious package.


Zachary, adamant that true romance must wait until the conclusion of his fighting career, struggles with his budding feelings for another man.  Also complicating matters is the realization that the item in Gustavo's possession may be the fabled and bejeweled 'cobra' of Hollywood legend.