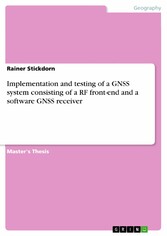 
Master's Thesis from the year 2017 in the subject Geography / Earth Science - Geology, Mineralogy, Soil Science, grade: 1.0, Technical University of Darmstadt (Fachbereich Geo- und Material-Wissenschaften), course: Abschlussarbeit im MSc TropHEE (tropical Hydro-Geology and Environmental Engineering) in Zusammenarbeit zwischen Geologie und Geodäsie (Bau-Ingenieurwesen), language: English, abstract: An introduction into the theory of software defined receivers and especially in such for detecting GNSS signals, acquiring and tracking GNSS satellites, calculating pseudo ranges, positions, velocity and time (PVT) is presented. Basis of the practical work was the open source project SoftGPS, programmed in Matlab and published by (Borre 2007). The Radio Frequency front end (RF-FE) used in this project was no longer available and was replaced by one with different behavior: NSL Stereo (amplifier, mixer, sampler, and A/D converter in two chains). Adaptations, corrections and extensions to the Matlab code were neces-sary to work with the new front end and to get new functions. With Stereo came also new Matlab- and C/C++ code that did not work properly. Parallel to the projected working environment - Ubuntu 16.04 Linux with Matlab 2016a - also Windows 10-64bit and a Windows XP-64bit beta-software from NSL from January 2013 had to be used due to long delays at NSL to provide updated / working Linux versions: the original software from 2012 for Ubuntu 10 was not working in any newer Linux distribution. Finally a version for Ubuntu 14.04-64bit from Jan 2016 was provided after most of the grabbing of different GNSS-signals was already done. Code of (Borre 2007) and of NSL for Stereo RF-FE were thoroughly analyzed and documented. Besides own descriptions also the M2HTML documentation generator and GraphViz (for generating dependency graphs) were used. The software was also changed and expanded to archive demands for more modularity, performance, quality and functionality (C/No calculation, output of correct velocities in UTM coordinates, statistics about positions and velocities, continuous processing, ...). As code release tool, Git was used for a complete change history and to be able to recover old versions of the code. With the Git-Bash, identical (UNIX-like) behavior was achieved on both Linux and Windows platforms. Git is more modern than the system used in (Borre 2007) and integrated in Matlab. Even with only 4 parallel processes (in a notebook) and a processing conditioned by signal to noise ratios C/No the most time consuming tracking was reduced to about a quarter of the initial processing time.