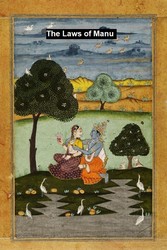 The Laws of Manu

The Laws of Manu

According to Wikipedia: 'Manusmṛti (written also as Manusmriti or Manusmruti)is the most important and earliest metrical work of the Dharmaśāstra textual tradition of Hinduism. Generally known in English as the Laws of Manu, it was first translated into English in 1794 by Sir William Jones, an English Orientalist and judge of the British Supreme Court of Judicature in Calcutta. The text presents itself as a discourse given by Manu, the progenitor of mankind to a group of seers, or rishis, who beseech him to tell them the 'law of all the social classes'