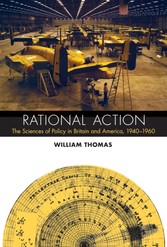 Rational Action - The Sciences of Policy in Britain and America, 1940-1960

Rational Action - The Sciences of Policy in Britain and America, 1940-1960

During World War II, the Allied military forces faced severe problems integrating equipment, tactics, and logistics into successful combat operations. To help confront these problems, scientists and engineers developed new means of studying which equipment designs would best meet the military's requirements and how the military could best use the equipment it had on hand. By 1941 they had also begun to gather and analyze data from combat operations to improve military leaders' ordinary planning activities. In Rational Action, William Thomas details these developments, and how they gave rise during the 1950s to a constellation of influential new fields -- which he terms the 'sciences of policy' -- that included operations research, management science, systems analysis, and decision theory. Proponents of these new sciences embraced a variety of agendas. Some aimed to improve policymaking directly, while others theorized about how one decision could be considered more rational than another. Their work spanned systems engineering, applied mathematics, nuclear strategy, and the philosophy of science, and it found new niches in universities, in businesses, and at think tanks such as the RAND Corporation. The sciences of policy also took a prominent place in epic narratives told about the relationships among science, state, and society in an intellectual culture preoccupied with how technology and reason would shape the future. Thomas follows all these threads to illuminate and make new sense of the intricate relationships among scientific analysis, policymaking procedure, and institutional legitimacy at a crucial moment in British and American history.