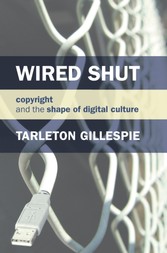 Wired Shut - Copyright and the Shape of Digital Culture

Wired Shut - Copyright and the Shape of Digital Culture

While the public and the media have been distracted by the story of Napster, warnings about the evils of &quote,piracy,&quote, and lawsuits by the recording and film industries, the enforcement of copyright law in the digital world has quietly shifted from regulating copying to regulating the design of technology. Lawmakers and commercial interests are pursuing what might be called a technical fix: instead of specifying what can and cannot be done legally with a copyrighted work, this new approach calls for the strategic use of encryption technologies to build standards of copyright directly into digital devices so that some uses are possible and others rendered impossible. In Wired Shut, Tarleton Gillespie examines this shift to &quote,technical copy protection&quote, and its profound political, economic, and cultural implications.Gillespie reveals that the real story is not the technological controls themselves but the political, economic, and cultural arrangements being put in place to make them work. He shows that this approach to digital copyright depends on new kinds of alliances among content and technology industries, legislators, regulators, and the courts, and is changing the relationship between law and technology in the process. The film and music industries, he claims, are deploying copyright in order to funnel digital culture into increasingly commercial patterns that threaten to undermine the democratic potential of a network society. In this broad context, Gillespie examines three recent controversies over digital copyright: the failed effort to develop copy protection for portable music players with the Strategic Digital Music Initiative (SDMI), the encryption system used in DVDs, and the film industry's legal response to the tools that challenged them, and the attempt by the FCC to mandate the &quote,broadcast flag&quote, copy protection system for digital television. In each, he argues that whether or not such technical constraints ever succeed, the political alignments required will profoundly shape the future of cultural expression in a digital age.