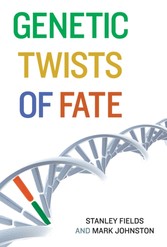 News stories report almost daily on the remarkable progress scientists are making in unraveling the genetic basis of disease and behavior. Meanwhile, new technologies are rapidly reducing the cost of reading someone's personal DNA (all six billion letters of it). Within the next ten years, hospitals may present parents with their newborn's complete DNA code along with her footprints and APGAR score. In Genetic Twists of Fate, distinguished geneticists Stanley Fields and Mark Johnston help us make sense of the genetic revolution that is upon us. Fields and Johnston tell real life stories that hinge on the inheritance of one tiny change rather than another in an individual's DNA: a mother wrongly accused of poisoning her young son when the true killer was a genetic disorder, the screen siren who could no longer remember her lines because of Alzheimer's disease, and the president who was treated with rat poison to prevent another heart attack. In an engaging and accessible style, Fields and Johnston explain what our personal DNA code is, how a few differences in its long list of DNA letters makes each of us unique, and how that code influences our appearance, our behavior, and our risk for such common diseases as diabetes or cancer.