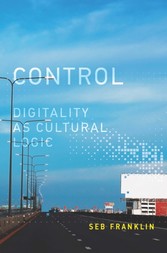 Is there a cultural logic of what we have come to call the information age? Have the technologies and techniques centered on the computer provided not only tools but also the metaphors through which we now understand the social and economic formation of our world? In Control, Seb Franklin addresses the conditions of knowledge that make the concept of the 'information economy' possible while at the same time obscuring its deleterious effects on material social spaces. In so doing, Franklin traces three intertwined threads: the relationships among information, labor, and social management that emerged in the nineteenth century, the mid-twentieth-century diffusion of computational metaphors, and the appearance of informatic principles in certain contemporary socioeconomic and cultural practices.Drawing on critical theory, media theory, and the history of science, Franklin names control as the episteme grounding late capitalism. Beyond any specific device or set of technically mediated practices, digitality functions within this episteme as the logical basis for reshaped concepts of labor, subjectivity, and collectivity, as well as for the intensification of older modes of exclusion and dispossession. In tracking the pervasiveness of this logical mode into the present, Franklin locates the cultural traces of control across a diverse body of objects and practices, from cybernetics to economic theory and management styles, and from concepts of language and subjectivity to literary texts, films, and video games.