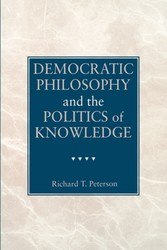 Democratic Philosophy and the Politics of Knowledge

Democratic Philosophy and the Politics of Knowledge

Debates over postmodernism, analyses of knowledge and power, and the recurring issue of Heidegger's Nazism have all deepened questions about the relation between philosophy and the social roles of intellectuals. Against such postmodernist rejections of philosophical theory as mounted by Rorty and Lyotard, Richard Peterson argues that precisely reflection on rationality, in appropriate social terms, is needed to confront urgent political issues about intellectuals. After presenting a conception of intellectual mediation set within the modern division of labor, he offers an account of postmodern politics within which postmodern arguments against critical reflection are themselves treated socially and politically.Engaging thinkers as diverse as Kant, Hegel, Marx, Habermas, Foucault, and Bahktin, Peterson argues that a democratic conception and practice of philosophy is inseparable from democracy generally. His arguments about modern philosophy are tied to claims about the relation between liberalism and epistemology, and these in turn inform an account of impasses confronting contemporary politics. Historical arguments about the connections between postmodernist thought and practice are illustrated by discussions of the postmodernist dimensions of recent politics.