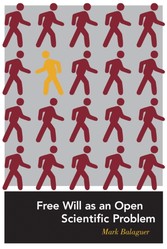 Free Will as an Open Scientific Problem

Free Will as an Open Scientific Problem

In this largely antimetaphysical treatment of free will and determinism, Mark Balaguer argues that the philosophical problem of free will boils down to an open scientific question about the causal histories of certain kinds of neural events. In the course of his argument, Balaguer provides a naturalistic defense of the libertarian view of free will. The metaphysical component of the problem of free will, Balaguer argues, essentially boils down to the question of whether humans possess libertarian free will. Furthermore, he argues that, contrary to the traditional wisdom, the libertarian question reduces to a question about indeterminacy--in particular, to a straightforward empirical question about whether certain neural events in our heads are causally undetermined in a certain specific way, in other words, Balaguer argues that the right kind of indeterminacy would bring with it all of the other requirements for libertarian free will. Finally, he argues that because there is no good evidence as to whether or not the relevant neural events are undetermined in the way that's required, the question of whether human beings possess libertarian free will is a wide-open empirical question.