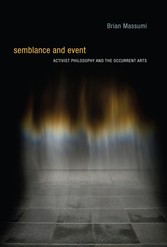 Semblance and Event - Activist Philosophy and the Occurrent Arts

Semblance and Event - Activist Philosophy and the Occurrent Arts

Events are always passing, to experience an event is to experience the passing. But how do we perceive an experience that encompasses the just-was and the is-about-to-be as much as what is actually present? In Semblance and Event, Brian Massumi, drawing on the work of William James, Alfred North Whitehead, Gilles Deleuze, and others, develops the concept of 'semblance' as a way to approach this question. It is, he argues, a question of abstraction, not as the opposite of the concrete but as a dimension of it: 'lived abstraction.' A semblance is a lived abstraction. Massumi uses the category of the semblance to investigate practices of art that are relational and event-oriented -- variously known as interactive art, ephemeral art, performance art, art intervention -- which he refers to collectively as the 'occurrent arts.' Each art practice invents its own kinds of relational events of lived abstraction, to produce a signature species of semblance. The artwork's relational engagement, Massumi continues, gives it a political valence just as necessary and immediate as the aesthetic dimension.