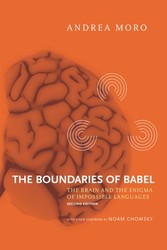 Boundaries of Babel - The Brain and the Enigma of Impossible Languages

Boundaries of Babel - The Brain and the Enigma of Impossible Languages

In The Boundaries of Babel, Andrea Moro describes an encounter between two cultures: contemporary theoretical linguistics and the cognitive neurosciences. As a leading theoretical linguist in the generative tradition and also a neuroscientist, Moro is uniquely equipped to tell this story. Moro examines what he calls the &quote,hidden&quote, revolution in contemporary science: the discovery that the number of possible grammars is not infinite and that their number is biologically limited. This will require us to rethink not just the fundamentals of linguistics and neurosciences but also our view of the human mind. Moro searches for neurobiological correlates of &quote,the boundaries of Babel&quote, -- the constraints on the apparent chaotic variation in human languages -- by using an original experimental design based on artificial languages exploiting neuroimaging techniques. This second edition includes a new chapter in which Moro extends the exploration of the boundaries of Babel in search of the source of order with which all human languages are endowed. Reflecting on the emerging methodology that obtains physiological data from awake brain surgery, Moro shifts from considering where the neurophysiological processes underlying linguistic competence take place -- that is, where neurons are activated -- to considering the neuronal code involved in these processes -- that is, what neurons communicate to each other. This edition also features a substantive new foreword by Noam Chomsky synthesizing the major issues theoretical syntax will face in the near future.