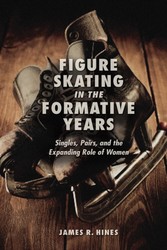 Figure Skating in the Formative Years - Singles, Pairs, and the Expanding Role of Women

Figure Skating in the Formative Years - Singles, Pairs, and the Expanding Role of Women

Once a winter pastime for socializing and courtship, skating evolved into the wildly popular competitive sport of figure skating, one of the few athletic arenas where female athletes hold a public profile--and earning power--equal to that of men.?Renowned sports historian James R. Hines chronicles figure skating's rise from its earliest days through its head-turning debut at the 1908 Olympics and its breakthrough as entertainment in the 1930s. Hines credits figure skating's explosive expansion to an ever-increasing number of women who had become proficient skaters and wanted to compete, not just in singles but with partners as well.?Matters reached a turning point when British skater Madge Syers entered the otherwise-male 1902 World Championship held in London and finished second. Called skating's first feminist, Syers led a wave of women who made significant contributions to figure skating and helped turn it into today's star-making showcase at every Winter Olympics.?Packed with stories and hard-to-find details, Figure Skating in the Formative Years tells the early history of a sport loved and followed by fans around the world.