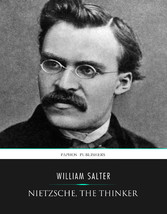 SOME CHARACTERISTICS OF HIS THINKING

Nietzsche’s life was practically one of thought. Of outer events, “experiences” in the ordinary sense, there were few: “we have not our heart there,” he confesses, “and not even our ear.” But to the great problems of life he stood in a very personal relation. He philosophized not primarily for others’ sake, but for his own, from a sense of intimate need. Body and mind co-operated. “I have written all my books with my whole body and life; I do not know what purely spiritual problems are.” “May I say it? all truths are for me bloody truths—let one look at my previous writings.” “These things you know as thoughts, but your thoughts are not your experiences, but the echo of the experiences of others: as when your room shakes from a wagon passing by. But I sit in the wagon, and often I am the wagon itself.” These were private memoranda that have been published since his death, but an attentive reader of books he published often has the sense of their truth borne in upon him. As he puts it objectively in Joyful Science, it makes all the difference in the world whether a thinker is personally related to his problems, so that his fate is bound up in them, or is “impersonal,” touching them only with the feelers of cool, curious thought. So earnest is he, so much does this make a sort of medium through which he sees the world, that he once set down Don Quixote as a harmful book, thinking that the parodying of the novels of chivalry which one finds there becomes in effect irony against higher strivings in general—Cervantes, he says, who might have fought the Inquisition, chose rather to make its victims, heretics and idealists of all sorts, laughable, and belongs so far to the decadence of Spanish culture. Some have even been led to question whether Nietzsche was capable of humor. But there is no need to go to this length. Not only does he give a high place to laughter in his books, not only are there special instances of humorous description to be found there, but colleagues of his at Basel, like Burckhardt and Overbeck, testify to his infectious laughter at their frequent meeting place (“Baumannshöhle”), Nietzsche himself owning that he had much to make up for, since he had laughed so little as child and boy. For all this the undercurrent of his life was unquestionably serious, and he cannot be placed among writers who give us much surface cheer. Occasionally he indulges in pleasantries to the very end of relief from graver work—such, for instance, as those which make a part of “The Case of Wagner” (see the preface to this pamphlet, where it is also said that the subject itself is not one to make light about), and those in Twilight of the Idols. In the preface to the latter he remarks that when one has a great task like that of a “turning round (Umwerthung) of all values,” one must shake off at times the all too heavy weight of seriousness it brings.

As his motives in philosophizing were personal, so were the results he attained—some of them at least: they were for him, helped him to live, whether they were valuable for others or not. Referring to certain of his writings, he calls them his “recipe and self-prepared medicine against life-weariness.” In a posthumous fragment (perhaps from a preface for a possible book), he says, “Here a philosophy—one of my philosophies—comes to expression, which has no wish to be called ‘love of wisdom,’ but begs, perhaps from pride, for a more modest name: a repulsive name indeed, which may for its part contribute to making it remain what it wishes to be: a philosophy for myself—with the motto: satis sunt mihi pauci, satis est unus, satis est nullus.” Sometimes he distrusts writing for the general, saying that the thinker may make himself clearer in this way, but is liable to become flatter also, not expressing his most intimate and best self—he confesses that he is shocked now and then to see how little of his own inmost self is more than hinted at in his writings. He admires Schopenhauer for having written for himself; for no one, he says, wishes to be deceived, least of all a philosopher who takes as his law, Deceive no one, not even thyself. He comes to say at last, “I take readers into account no longer: how could I write for readers? … But I note myself down, for myself.” “Mihi ipsi scripsi—so it is; and in this way shall each one do his best for himself according to his kind.” At least this became an ideal, for he owns that sometimes he has hardly the courage for his own thoughts (“I have only rarely the courage for what I really know”).

If I may give in a sentence what seems to me the inmost psychology and driving force of his thinking, it was like this:—Being by nature and by force of early training reverent, finding, however, his religious faith undermined by science and critical reflection, his problem came to be how, consistently with science and the stern facts of life and the world, the old instincts of reverence might still have measurable satisfaction, and life again be lit up with a sense of transcendent things. He was at bottom a religious philosopher—this, though the outcome of his thinking is not what would ordinarily be called religious. There is much irony in him, much contempt, but it is because he has an ideal; and his final problem is how some kind of a practical approximation to the ideal may be made. He himself says that one who despises is ever one who has not forgotten how to revere.

The question is sometimes raised whether Nietzsche was a philosopher at all. Some deny it, urging that he left no systematic treatises behind him; they admit that he may have been a poet, or a master of style (“stylist,” to use a barbarous word imported from the German), or a prophet—but he was not a thinker. But because a man does not write systematically, or even does not care to, it does not follow that he has not deep-going, more or less reasoned thoughts, and that these thoughts do not hang together. Nietzsche reflected on first principles in almost every department of human interest (except perhaps mathematics). Though his prime interest is man and morals, he knows that these subjects cannot be separated from broader and more ultimate ones, and we have his ideas on metaphysics and the general constitution of the world. Poets, “stylists,” prophets do not commonly lead others to write about their theory of knowledge, do not frequently deal, even in aphorisms, with morality as a problem, with cause and effect, with first and last things. Undoubtedly Nietzsche appears inconsistent at times, perhaps is really so. Not only does he express strongly what he thinks at a given time and leaves it to us to reconcile it with what he says at other times, not only does he need for interpreter some one with a literary as well as scientific sense, but his views actually differ more or less from time to time, and even at the same time—and Professor Höffding is not quite without justification in suggesting that they might more properly have been put in the form of a drama or dialogue. Nietzsche himself, in speaking of his “philosophy,” qualifies and says “philosophies,” as we have just seen. And yet there is coherence to a certain extent in each period of his life, and at last there is so much that we might almost speak of a system. There is even a certain method in his changes—one might say, using Hegelian language, that there is first an affirmation, then a negation, and finally an affirmation which takes up the negation into itself. Indeed, the more closely I have attended to his mental history, the more I have become aware of continuing and constant points of view throughout—so much so that I fear I may be found to repeat myself unduly, taking him up period by period as I do. The testimony of others may be interesting in this connection. Professor René Berthelot remarks in the Grande Encyclopédie, though with particular to the works of the last period, “They are the expression of a perfectly coherent doctrine, although Nietzsche has never made a systematic exposition of it.” Dr. Richard Beyer says, “His doctrine does not lack system but systematic presentation, which however also Socrates, a Leibnitz did not leave behind them.” Professor Vaihinger, who writes professedly not as a disciple, much less apostle of Nietzsche, but simply as an historian of philosophy, describes his book by saying, “I have brought the seemingly disorderly scattered fragments, the disjecta membra, into a strictly consistent system.” Nietzsche himself, though ordinarily too much in his struggles to grasp them as a whole and see their final import, occasionally had a clear moment and looked as from a height upon the sum-total of his work. Writing from Turin to Brandes, 4th May, 1888, to the effect that his weeks there had turned out “better than any for years, above all more philosophic,” he adds, “Almost every day for one or two hours I have reached such a point of energy that I could see as from an eminence my total conception—the immense variety of problems lying spread out before me in relief and clear outline. For this a maximum of force is needed, which I had hardly hoped for. Everything hangs together, for years everything has been going in the right direction; one builds his philosophy like a beaver—is necessary and...