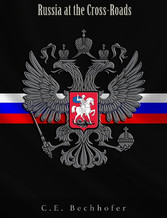 Russia at the Cross-Roads

Russia at the Cross-Roads

THE HAMLET OF THE NATIONS

The chief characteristic of Russia is that it is a land-locked empire.

This is all the more extraordinary when one considers its vast size. With its colonial dominions, it is about one hundred and fifty times the size of England and Wales, twice the size of all Europe, and comprises a sixth of the inhabited world; yet it has practically no direct communication, by land or sea, that is not at the mercy of its neighbours. This chapter is intended to show how this lack of a secure outlet has affected Russia’s political and economic, and even psychological, conditions.

Let us imagine a Russian stationed in Moscow attempting to envisage the geographical features of his country. Of course, were Russia no larger than an ordinary European nation, were even Russia in Europe the sole object of his consideration, the lack of means of communication would prevent him having a close personal knowledge of the lie of the land. But we will suppose our observer to possess a fairly accurate notion of the chief features of the country. Two ways of egress not dominated by foreign nations would suggest themselves to him—Archangel and Vladivostock. Archangel, however, is as far from Moscow as the Orkney Islands from London, and, even under the best conditions, a port on the Arctic Ocean has few facilities for ocean trade. Vladivostock, again, is more than five thousand miles away, and the suggestion to use it as a port for European products would be as absurd as to assure a Frenchman that Cape Town would suit his purpose for Mediterranean trade.

Our Muscovite, then, returns to the contemplation of less remote regions. Petrograd, he may think, is what it has been claimed to be, a “window to Europe.” Two hundred years ago, Peter the Great built it with this aim on the Finnish marshes at the mouth of the Neva, and removed the administration from Moscow. At the same time he established a navy to maintain the new capital and set about forcing commerce up from the southern provinces to the north. So far as commerce naturally flows into the Baltic, it comes rather by the basin of the Southern Dvina to Riga, which port has actually a larger export trade than Petrograd. But the portion of the Baltic Sea that touches Russian territory is as a rule frozen over in the winter months. Besides this, the sea is practically landlocked, the only egress being by the narrow straits commanded by Denmark and Sweden. Thus, the old criticism that the “window to Europe” is too often obscured by frost flowers is joined to the mishap that it looks only upon a corridor.

It has often been said that Peter the Great’s attempt to force commerce northwards was against the stream. The metaphor is all the more correct when we consider the importance of the Russian waterways as carriers. Distant Archangel owes its existence as a port to its situation at the mouth of the Northern Dvina, which, however, is completely frozen over for half the year. Into the Baltic Sea flow the Neva, the Southern Dvina, reaching it at Riga, and the Vistula which, though it is the chief commercial highway of all Poland, has its mouth in German territory, by Dantzig, and thus its economic use to the lands about its source is limited. But the largest and most important rivers of European Russia flow southward. There is the Dnieper which flows from the north-west of Moscow through all the rich western provinces by way of Kiev and the “Black Earth,” and falls at last into the Black Sea near Odessa. Further west still is the Dniester, serving what are from our Muscovite’s point of view the cis-Carpathian provinces of Bessarabia. Then there is the Don, carrying the produce of the central portion of the Black Earth, the rich belt of land on which Russia’s agricultural as well as mineral wealth mainly depends, into the Sea of Azov and so into the Black Sea. Further to the east is the Volga, the largest river in Europe, which, navigable for two thousand miles, flows through the central and eastern country as far as Astrachan, where it falls into that huge and economically important inland lake, the Caspian Sea. In its course it catches the colonial produces of Siberia on their way to Europe, a convenience which will be incalculably extended, when the great waterway is connected with the network of rivers and canals that acts as carrier to Siberia.

In spite of the extraordinary remoteness of their mouths, the Southern Dvina, the Dnieper and the Volga all have their sources in the Valdai Hills, and form with their tributaries and canals the skeleton of a system of waterways which with future development will act as an efficient national carrier internally. But whether the tendency of commerce is to float to the north into the Baltic, or to drop south into the Black Sea, neither course provides Russia with an outlet to the world. The Black Sea, besides its utility as a clearinghouse for the agricultural produce of the interior, is also the only centre for the export of the vast mineral wealth of the Caucasus. But here again the only outlet, the Dardanelles, is in the hands of Russia’s ancient enemy, Turkey. The result for the world at large is that the exploitation of Russia’s wealth, agricultural and mineral, remains comparatively unencouraged. There is no incentive for Russia to develop her resources, when she has no secure means of conveying them to the world’s markets. The present situation, in which a single enemy has blockaded the outlet both from the Baltic and from the Black Sea, illustrates by the light of war what might happen at any time. The risk and uncertainty, even in peace time, are too unsettling for calm and calculated development to commend itself to the Russians. If the world wishes to profit by Russia’s natural wealth, it is from Russia’s point of view only a fair bargain to give her a road to the markets. By this road she must have secure passage, for not otherwise will the exploitation of her soil repay her.

If our Russian comes to examine the matter further, he soon finds that Russia’s desire to have an unimpeded entrance into the outer world has coloured the whole course of her history. Ethnologists have shown that a Balkanic people passed over the Carpathians into what is now called the Russian plain, and dispossessed and to a certain extent mingled with the aboriginal Finnish tribes, while sweeping them aside to the east and west. There seems also to have been an admixture of Scandinavian elements. The settlers split up into numerous princedoms and republics. They were unable to offer any combined and effective resistance to the raids of the Golden Hordes, who in the thirteenth century overran the country, and swept past into Central Europe; but in course of time the Mongol conquest had the effect of welding all the clans together. When the first impetus of the invaders subsided and their centre was again withdrawn into Asia, the command of the west was left in the hands of three Khans, at Kazan, Astrachan and in the Crimea. These appointed the princes of Moscow to collect dues and enforce obedience from the other vassals. In this way the Muscovites acquired authority, and soon a well-cemented league came into existence under their headship. By skilful diplomacy Ivan III, who reigned from 1462 to 1505, played off the three Khanates against each other and finally drove out the remnants of Mongol power back into Asia. At the same time, the foundations of the Siberian colonies were laid. Moscow began to be known as the “third and last Rome” in succession to Constantinople, which had fallen to the Turks, and found its rising power faced on the European side by a wall of enemies. In the north there were the Swedes, in the west Poland, the two connected by the armies of the Livonian league. Further south were the outlaw Cossacks of the Ukraine. From Ivan the Terrible (15301584) to Peter the Great (1672-1725) the history of Russia is one long struggle against its neighbours. These also had their conflicts. Lithuania was soon split up between Sweden and Poland. At one time the Poles overran both Muscovy and the Ukraine, but eventually they were driven out. By the battle of Poltava (1709), Peter the Great destroyed the hopes of the Swedes and subjugated the Ukraine. But this meant no more than the safeguarding of the Russian Empire by the establishment of a wall of buffer states. The neighbours were different, but just as determined to hem in Russia from contact with the outer world. The Turks stood over the Balkans and the outlet of the Black Sea, and resisted any attempt to advance in Asia Minor; the Persians barred the way to the Persian Gulf and India. Sweden remained hostile, though the operations were more restricted; behind Lithuania and Poland came Austria and the Germanic states, all quite prepared to accept Russia as an ally, but equally determined to allow her no toll-free passage into Europe.

The middlemen soon became the mastermen and Russia became more and more the economic handmaid of her neighbours. As Siberia is to her, so she became to her western neighbours. The hated Germans held one side of the bridge into Europe, and the condition by which Russia received the privilege to take part in the world’s markets was the gradual control of her activities by Germans. The Russian crown passed to a Germanic prince; the German schoolmaster got abroad and his commercial countrymen followed him throughout the land. The profitable policy of treating the Russians as a subject race was maintained by all the parasites that swarmed across the border. There was no escape for the Russians, no way out from their difficulties. The Russian emperors and ministers became privileged spectators of the...