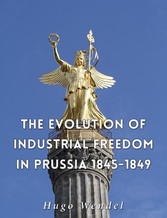 The Evolution of Industrial Freedom in Prussia, 1845-1849

The Evolution of Industrial Freedom in Prussia, 1845-1849

THE INTRODUCTION OF INDUSTRIAL FREEDOM INTO PRUSSIA 1731-1845

THE CRAFT GUILDS, ALTHOUGH A product of mediaeval social and economic conditions, maintained themselves far down into recent times. Long before the French Revolution, however, the growing individualistic conception of life and the new forms of industry had made them an antiquated institution. Their purpose was, furthermore, vitiated by the introduction of numerous abuses. As early as 1731, therefore, the German Imperial Diet had resolved upon reform. In the following year, this resolution resulted in a law for the provinces of Prussia within the Holy Roman Empire. East Prussia received a new code in 1733; West Prussia, in 1774.

Aside from the latter, no new industrial statutes of importance were promulgated in Prussia until after the humiliating defeat at Jena in 1806. Some years before, however, in 1794, the legal principles pertaining to trade and industry, as embodied in the existing laws, had been codified and published as a part of the new Prussian Code (Allgemeines Landrecht). This codification was in every way in harmony with the spirit of the age, and reflected the influence of rationalism as it was interpreted in the light of benevolent absolutism.

The industrial reorganization of the Prussian state under the ministers Stein and Hardenburg reached its culmination in the introduction of industrial freedom (Gewerbefreiheit). This was embodied in three measures of the years 1810, 1811, and 1820, respectively. Naturally, the guilds disliked the new freedom, for it infringed upon their time-honored monopolies. They exerted all the influence at their command against the new laws. As a result, the state felt called upon to reopen the question. The Council of State was ordered in 1824 to discuss the advisability of revision. In 1845, after twenty-one years of deliberation, a new measure was promulgated. Although this new law tried to establish a compromise between industrial freedom and state control, it failed to meet with the approval of those whose condition it sought to ameliorate. By 1848, craftsman and laborer alike demanded reform. The government again took the matter under consideration, but reached a decision decidedly favorable to the guilds.

In 1869, however, the North German Confederation adopted a more enlightened policy, and freed the industries of North Germany from the trammels of an economic organization long since antiquated. Three years later, the law of 1869 was introduced into Baden, Wuerttemberg, and Bavaria, and thus became the law of the newly formed German Empire. Although this law has undergone various amendments in more recent times, its main features still survive.

The history of craft guild legislation in Prussia from the middle of the eighteenth century to 1845 has already been written. The law of 1869 and subsequent amendments have likewise been adequately analyzed. The purpose of this study, therefore, is to discuss the law of 1845 in its relation to the evolution of industrial freedom in Prussia and to relate it to the events of 1848.

In order to appreciate the degree of industrial freedom retained in 1845, it will be necessary to outline briefly its gradual introduction at the close of the eighteenth and the beginning of the nineteenth century. The first fact of importance in this connection is the Prussian Code of 1794 (Allgemeines Landrecht) referred to above. As previously stated, it contains the laws pertaining to craft guilds and factories. The general principles there laid down distinguished between trades over which guilds had a monopoly and those open to any one. Two kinds of craft organizations were recognized as legal, those of limited and those of unlimited membership. The exclusiveness of the former could be invaded by the right of the crown to create free-masters (Freimeister), i.e., masters not obliged to join the guild, while the latter could be prevented from becoming monopolistic by the king’s refusal to limit their membership. As new guilds could be established only by royal charter, and as the state reserved the right of amendment, the whole system was well under the control of the central authorities.

Government control was made even more effective by placing the guilds directly under the jurisdiction of the municipal administrative board. A representative appointed by the board attended all meetings of the guild. He was keeper of the seal and had to affix his signature to all orders and documents. He was expected to prevent the fixing of prices and the collection of dues and fines not prescribed by the charter. He supervised the administration of funds. It was the administrative board, not the guilds, that dealt with free-masters, who, by exceeding the terms of their grant, might infringe upon the rights of guilds. But this fact, as well as the obligation of rural craftsmen to join a guild of the nearest town, and the limitation upon all craftsmen to finish only so much of an article as the privileges of their guild permitted, clearly indicate that, although subject to state and town authorities, the guilds still held a unique position in the industrial system of the period.

The advance toward a more liberal industrial policy is clearly seen in the regulations regarding promotion from journeyman to master-workman. The rule that no one should attain the highest rank in the system without first acquiring burghership, was retained; but restrictions made by the guilds to limit the number of masters were abolished. Thus a journeyman could not be prevented from advancing to the next stage for reasons of caprice or extortion, or because he was married; nor could he be required to make a masterpiece unusually costly or unsalable. He was allowed two re-examinations and guaranteed the right of appeal to the municipal administrative board for an investigation of the causes of the rejection of his work. After satisfactory examination and formal acceptance into the guild, a master desiring to change his place of residence, could establish himself in any city without being required to submit to a new test. This, however, did not apply to rural craftsmen who moved to town. They might be asked to make a masterpiece in accordance with the more difficult specifications of the town-guild.

In harmony with the increasing elasticity of this guild economy, masters, although forbidden to sell their wares outside of their guild-district, were permitted to make them “to order” for those living beyond it, and free-masters, as well as guild-masters, could employ apprentices and journeymen—the only restriction upon free-masters being that they must “accept” and “free” their apprentices through the guild. Guilds could not refuse to accept as apprentices illegitimate children duly legitimatized. Nor was previous employment, except that of flayer, a bar to admission. Subjects, however, were permitted to learn an urban handicraft only by consent of their lord, the general rule prevailing that children shall follow their father’s occupation. The rights of master and apprentice were protected by the fact that the relationship was contractual. Heavy fines, indecent customs, and costly banquets in connection with an apprentice’s promotion were prohibited.

In the regulations pertaining to journeymen, however, the rigid features of the old system were preserved. Thus a journeyman was obliged to travel and to confine his Wanderschaft to his own country. Permission to visit a foreign state could be obtained only from the police authorities. His credentials were deposited in the guild-chest as long as he was employed in a town. If no work could be found for him, he was obliged to leave. He might remain, however, if he hired himself out as a servant—an act which did not affect his social standing. His wages, as craftsman, were determined by the guild under the direction of the local government. In case of illness, he was entitled to assistance from the journeymen’s fund (Gesellenlade) and, eventually, from the guild treasury (Gewerkslade) and the municipal charity fund. He had to work on all days except legal holidays, and could be imprisoned for disobeying this rule. Under ordinary circumstances, both master and journeyman were bound to give two weeks’ notice before terminating their agreement. But the master could refuse to let his journeyman go, even after proper notice had been given, if the day on which he was entitled to leave fell within two weeks of a fair or an annual market. Failure to leave town after the return of his credentials made the journeyman a vagabond. Unlike the master-craftsmen, journeymen did not form an organization. They were not allowed to hold meetings unless especially permitted by the guild-charter or the police laws, and then only after informing the guild-elders of their intention. They could, however, elect an Altgeselle to supervise the benefit-fund. But he, too, was under the ultimate supervision of the elders and the representative of the municipal administrative board.

More significant than the rules concerning guilds are those relating to factory employees and artificers (Kuenstler). The date of the Prussian Code (1794) falls within the early period of the Industrial Revolution. With the introduction of machinery and new processes of production, there appear two factors destined to create a new social group and a new system of manufacture: the proletariat and the factory. The early stage of this new social and economic creative process is clearly reflected in the Code. It has, for example, only seventeen sections dealing...