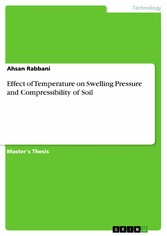 Effect of Temperature on Swelling Pressure and Compressibility of Soil

Effect of Temperature on Swelling Pressure and Compressibility of Soil

Master's Thesis from the year 2018 in the subject Engineering - Geotechnology, grade: 9.36, National Institute of Technology, Rourkela, language: English, abstract: Construction of building on clay soil is highly risky due to its poor strength. Clayey soil creates many problems to the Geotechnical Engineers primarily because of repeated change of moisture content. Normally, these soils increase in size and swell when they absorb water and reduce in size and shrink when they become dry. Volume change in soil leads to distortions in the form of settlement due to contraction as a result of dryness or in the form of expansion due to swelling as a result of the absorption of water. There may be the need for soil treatment to improve the engineering properties of such soil. Compacted bentonite is often used as a buffer materials and for radioactive waste disposal system. A good understanding of the hydro-mechanical behavior of clay soil is essential to ensure safe disposal. The present study reports the results on the effects of temperature on swelling pressure and compressibility characteristics of soil. In this study, two different type of soils were used. One of them was a bentonite (liquid limit = 139%) procured from Bikaner, Rajasthan another one was Rourkela local soil (liquid limit = 35%). A new oedometer was designed and developed in-house to carry out consolidation and swelling pressure tests at a higher temperature. Swelling pressures tests on compacted bentonite specimens of targeted dry density of 1.6 Mg/m3 were conducted under constant volume condition for the temperature range between 25 to 90 0C. Compressibility tests at various temperatures for both soils were conducted using distilled water as the saturating fluid. It observed that high temperature caused an increase in swelling pressure and compressibility index of bentonite soil. There is no effect of temperature on compressibility index of Rourkela local soil.