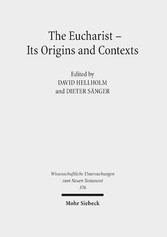 These three volumes are the results of two conferences on the Christian eucharist and its context in the traditions of sacred and communal meals; the first conference was held at the University of Kiel, the second at the University of Agder's Study Center at Metochi (Lesbos). Scholars from all around the world form an international, interdisciplinary and interdenominational collaboration from various fields including History of Religion, Classics, Old and New Testament, Judaism, Patristics, Archeology, and History of Art. Volume I deals with Old Testament, Early Jewish, and New Testament traditions, volume II with Patristic traditions and Iconography, and volume III approaches Near Eastern and Graeco-Roman traditions, as well as Archeology. Images, illustrations and indexes complete the volume.
The broad scope covered by these studies invites readers not only to a clearer interpretation of the origin of the Eucharist and its development in the early church, but also enables them to reach a better understanding of the religious and cultural background of sacred and communal meals in general in ancient societies.