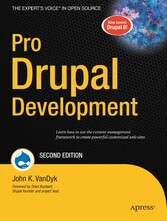 Widely praised for its in-depth coverage of Drupal internals, bestselling Pro Drupal Development has been updated for Drupal 6 in this edition, and provides are even more tricks of the trade to help you further yourself as a professional Drupal developer.
Assuming you already know how to install and bring a standard installation online, John K. VanDyk gives you everything else you need to customize your Drupal installation however you see fit. Pro Drupal Development, Second Edition delves deep into Drupal internals, showing you how to take full advantage of its powerful architecture.


John K. VanDyk has been a Drupal developer since 2004. In 2005, he organized the first Drupal conference in Antwerp, Belgium, with Drupal founder Dries Buytaert. John has contributed several modules to Drupal including the actions, workflow, publish, subscribe, and pubcookie modules and has been instrumental in the design of Drupal's Content Construction Kit. John's day job is as an entomology professor and systems analyst at Iowa State University, where he teaches undergraduate courses about insects. In his spare time, when not hacking on Drupal, John enjoys squash hunting and raising children.