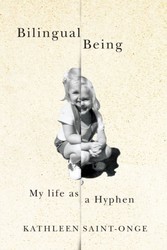 Bilingual Being - My Life as a Hyphen

Bilingual Being - My Life as a Hyphen

Written by a survivor of childhood abuse, this moving memoir traces the influence of the author's mother tongue in the formation of her identity, and the role her second language played in providing a psychological sanctuary. Kathleen Saint-Onge reflects on the ambiguities of growing up in a primarily French household while attending English schools as she richly recounts the emotional gains and losses of a life lived in two languages. A testament to the power of language in determining feelings of belonging or alienation, Bilingual Being also presents a portrait of the 1960s in Quebec and the changing role of the Catholic Church. Depicting with warmth and humour her own developing independence gained at school, Saint-Onge reveals the tensions between the social world of her evolving English and her deep roots in French-speaking Quebec City. It is an exploration of hope where language provides an escape from traumatic memories and a chance to reconstruct a secure sense of self. Bilingual Being is a superbly crafted autobiography that seamlessly moves from the remembrance of abuse to observations of living bilingualism and the gradual unfolding of recovery in adulthood. It is a compelling, beautiful, and brave narrative that tells a wider story about human resilience and the impact of language in creating new possibilities for life.